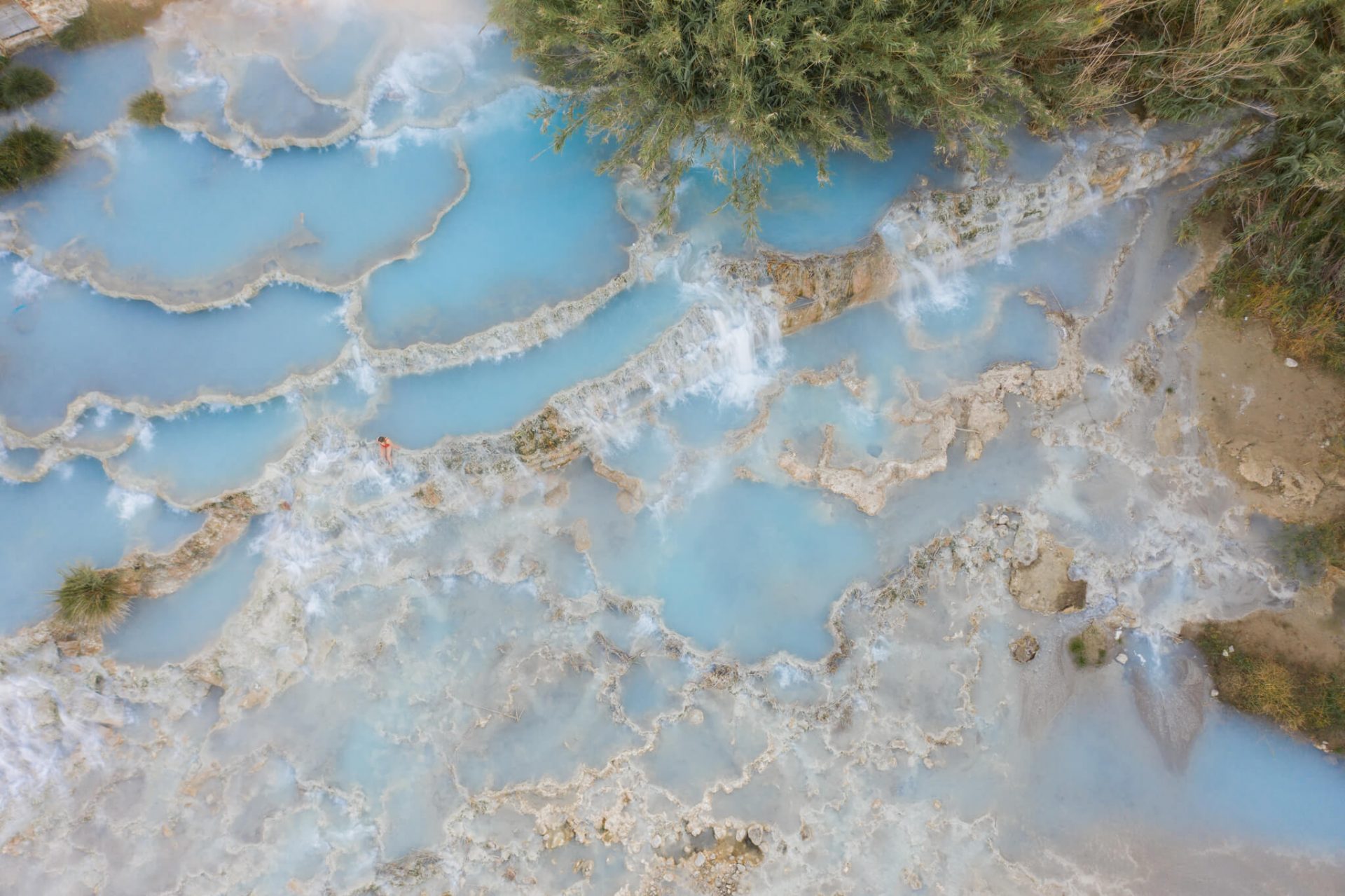 Terme di Saturnia is one of many Tuscan hot springs, from our observations the most popular of all. It’s not surprising that they are so popular! The water flowing down the white cascades forming azure-blue pools in the recesses, and the steam hovering above the thermal springs looks really magical and mysterious! Especially if you arrive during the golden hour – during sunset or sunrise. Terme di Saturnia are located near small town of Saturnia in the province of Grosetto in the south of Tuscany.

How did the Terme di Saturnia hot springs emerged?

There is a legend about creation of this amazing place, which tells about the fight of Jupiter and Saturn. The water rises to the surface in the place where Jupiter’s lightning hit. Legends are legends, but scientific facts tells us the place was created thanks to the extinct Monte Amiata volcano and rainwater. Water flows underground and escapes to the surface after 30 kilometers in a place we call Terme di Saturnia.

How to get to Terme di Saturnia?

Terme di Saturnia are located near the village of Saturnia in the province of Grosetto. However, to get there with GPS you have to enter ‘Cascate del Mulino‘ (Mulino is a mill in Italian), otherwise the navigation will lead you to artificial thermal pools located nearby, where there is also a hotel and spa. It’s worth knowing especially if you go at sunrise and have set amount of time to spend there, we drove pass the detour because it wasn’t very well marked, and navigated from a phone to artificial pools.

Entrance to the Terme di Saturnia hot springs area and the car park next to it are free. We got there at 5:50, which is about 15 minutes after sunrise, on Sunday during Covid times. At this time there were already a good few people. If you are focused on beautiful photos without people you have to get to the place before sunrise, and also avoid weekends, because locals also go there. The best light for photos is at sunrise and sunset. Not only those who chase beautiful photos come to the thermal baths at dawn also ones who simply want to take a dip. The water is hot and the air temperature in the morning is relatively low – make sense. Who would like to dabble in terribly warm water at 35 degrees heat?

It’s worth taking a towel with you – both for sitting and to cover yourself if you are going in the morning. After leaving hot water, 20 degrees air and light wind can cause goose bumps! Water shoes can also be useful, the baths look innocent but it’s really hard to move barefoot there because of the pebbles sticking in the feet.

We also advise you to keep an eye on your belongings, especially if you have documents or something expensive with you. Many people carelessly dropped belongings by the pools and rushed into the water, for the first 30 minutes it looked like a safe solution – only us and the locals around. After 30 minutes, we noticed young guys hanging around the Terme di Saturnia area who didn’t seem interested in bathing … Because of this we were taking a dip separately.

As we have already mentioned – the most beautiful photos come out there at sunrise and sunset, when the steam hovering above the water takes on shades of orange. During sunrise the sun is set ‘behind’ the thermal springs (at the top of the cascades), during sunset it illuminates the cascades in front. Our observations show that the best photos of Terme di Saturnia are those taken with a drone.

Where to stay?  If you are going to the hot springs at sunrise, then probably the ideal choice would be to stop in the village of Saturnia. We spent the night in Pitigliano, which is a town located on top of a rock ridge, around 30min away from Terme di Saturnia. In Pitigliano there is scenic old town and many places to eat and drink to keep you occupied.

Other hot springs in Tuscany

Terme di Saturnia isn’t the only one, but by far the most popular hot springs in Tuscany. Despite the fact that they are crowded and super popular, in our opinion it’s one of the most beautiful places that we saw in Tuscany. However, if you are discouraged by crowds, you can choose places less visited:

When planning trip to Tuscany you can’t forget about its adorable, old towns! Here’s post about 14 the most beautiful towns in Tuscany!