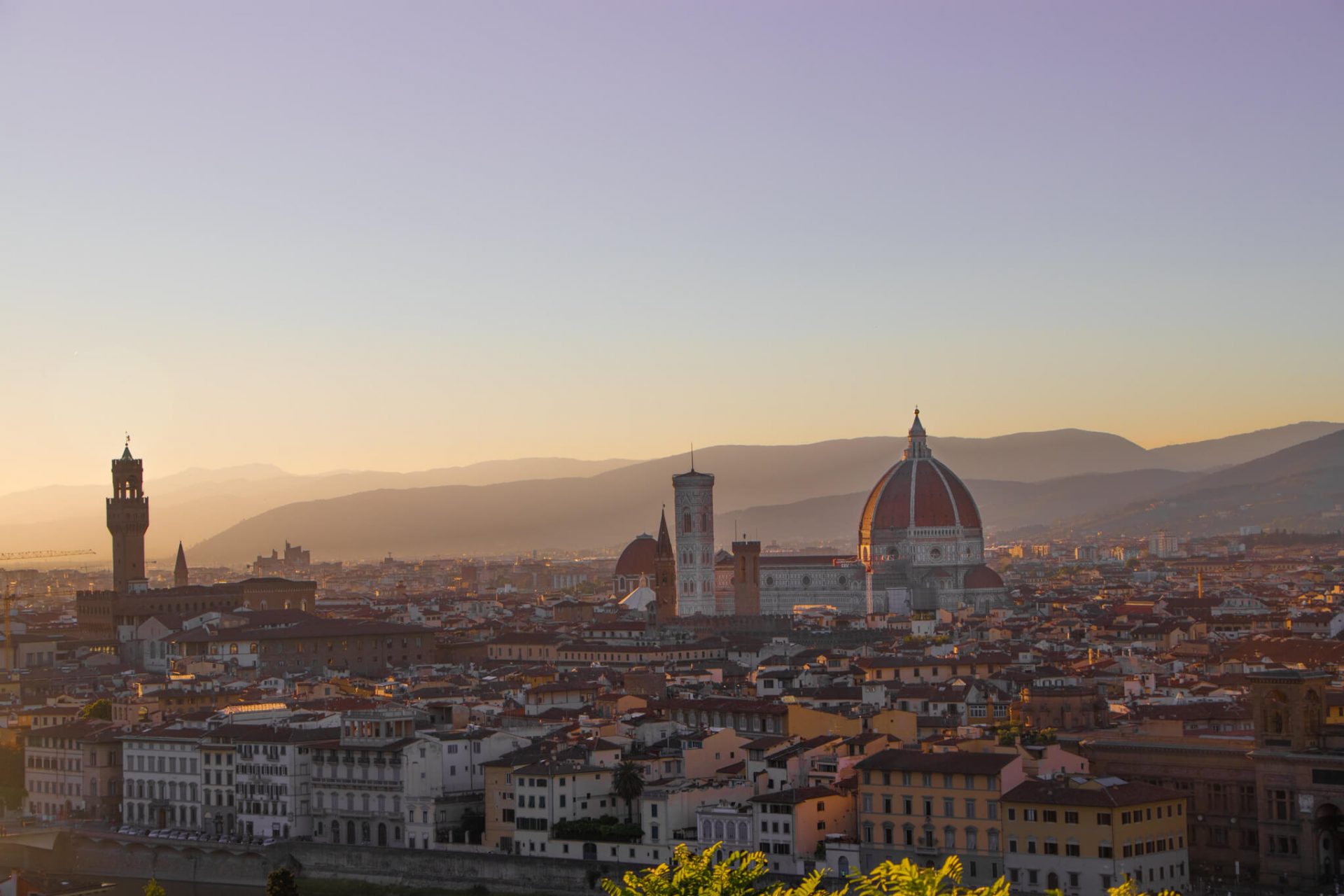 We had been dreaming about Florence for good few years, but somehow it never happened to come
true . Connections to nearby airports to hop off to Florence for the weekend from Ireland wasn’t
great, and longer trips around Italy weren’t on our schedule at the time. Everything changed with the
coronavirus, which significantly interrupted our plans. We had to cancel a lot trips, but we managed
to organize a week in Tuscany spontaneously when opportunity arose. Having the whole week in
Italy we decided to spend one day in Florence. We realized that one day in Florence was really, really
tight, but definitely better than nothing. After all, if we would fall in love with a place, we can always
come back!

If you want to really explore the city in depth, one day in Florence won’t be enough. We assumed in
advance that we would skip museums (we know it’s probably unbearable for art lovers.. lol ) and
focus on architecture, viewpoints and food. In one day we didn’t manage to see everything we had
planned, but maybe some of you will have just as little time in Florence and will use our tips. We
don’t hide the fact we spent a lot of time wandering the streets or sitting in bars and sipping Aperol.
The heat during this trip was unearthly, and we didn’t have the pressure to tick off as many places as
possible.

Florence was founded by the Etruscans, it was demolished in 82 BCE, and then rebuilt 23 years later
by Julius Caesar. It was rebuilt as a colony for former soldiers. While admiring the charms of Florence,
it’s hard to believe in its original purpose, because this elegant city is definitely not associated with
the army. The first Roman name was Florentia, over the centuries it has evolved to its present form –
Firenze. It was in Florence where the Renaissance was born, this style is represented in great
numbers by architectural monuments. After the unification of Italy, Florence was the provisional
capital of the country from 1865 to 1871.

Having one day in Florence we had to priorities – museums off the list, but we can’t let go the food! Market to start exploring Florence? Let it be! It wasn’t the best option as we started in the afternoon and many places on the market were already closing. For this reason, we came back in the morning of the next day. Il Mercato di San Lorenzo is a market consisting of an exterior and an interior. The external part is located on the square and around the streets surrounding it, where leather goods, clothes and souvenirs are sold, which is nothing that would be of particular interest to us. What’s best, which is food, is located inside the building and called Mercato Centrale. The market building was built between 1870 and 1874 and designed by Giuseppe Mengoni, the architect who also designed the Milan Galleria Vittorio Emanuele II.

On the ground floor of the market there are stands with meat, cheese, fruit and vegetables. In 2014, a restored food court opened on the first floor, which unfortunately was completely closed due to the virus. We had to be satisfied with the shacks on the ground floor. We managed to eat panino con lampredotto there, i.e. a sandwich with a cow stomach, and in the same place we also tried a delicious roast beef sandwich. The next day we returned to the market in the morning to buy cold meats and cheeses, 48 ​​euros for a net full of delicious things really wasn’t a bad price. We bought so much that we expected to pay much more.

A church with a beautiful facade located in the square called Santa Maria Novella. Apparently, there are some interesting pieces of art inside, but to be honest, it didn’t look open at all during our visit, and we didn’t inquire if it was possible to go inside. If you come to Florence by train, you will definitely not miss this place, the church is right next to the main station.

The appearance of the Church of San Lorenzo differs slightly from the impressively presented Cathedral of Saint Mary of Flowers or the aforementioned Church of Santa Maria Novella. Basilica di San Lorenzo was built in the 15th century on the site of a temple dating back to the 4th century. This church is characterized by a simple, austere facade.

Cathedral of Saint Mary of Flowers – One day in Florence

The gigantic, marble, richly ornamented Cathedral of Saint Mary of Flowers is a structure which sight will knock you off your feet. While standing and staring at this huge, majestic building, it’s really hard to breathe out anything other than “WOW”. Its construction began at the end of the 13th century, but it wasn’t completed until six centuries later. Originally, the cathedral was built in the gothic style, but due to later modifications its current appearance is called neo-gothic.

Next to the cathedral is the Campanile belfry. Apparently, you can enter both the bell tower and the dome – but we don’t know how, we totally missed the entrances to both places. We tried to enter the cathedral, but with the only open door it was announced that the cathedral is only open to the faithful during mass. As we usually follow the rules, we decided to respect this request plus it was during Covid and everything was a bit upside down. We decided that if not on the dome, at least with a view of it – we sat down in a restaurant next to the cathedral and for a long period of time we enjoyed the view of this extremely beautiful building in the company of a cold Aperol.

Ponte Vecchio – One day in Florence

Piazzale Michaelangelo – One day in Florence

The viewpoint at Piazzale Michaelangelo is our absolute favourite! During one day in Florence, we spent a good 4 hours there. We planned the Boboli Gardens and two other viewpoints, but we knew that if we wanted to make it for a sunset and set up equipment, we had to make a choice. The heat and tiredness made us decide that if we were to watch the sunset from somewhere, it should be the most badass place in Florence and so we put on Piazzale Michaelangelo, which was often referred to as the best vantage point in the city. We don’t know if it is the best, because we haven’t been to others. We know, however, that the view is breath-taking and surely no one will regret admiring the sunset or sunrise from this place. We liked it so much that we came back at sunrise the next day. If you want to have the best seat to admire the sunset – it’s worth coming earlier, there were not so many people in the morning:)

We saw the Pitti Palace only from the outside and it must be admitted that the size of the building is impressive, but its architecture is rather austere and doesn’t dazzles as much. There are as many as four museums inside.

The Boboli Gardens are gardens at the Pitti Palace. We really wanted to visit them, but unfortunately we arrived shortly after closing. Be sure to check the opening hours if you are going there! Especially when Covid restrictions in place.

Gardens with one of the city’s viewpoints.

Rose gardens, also one of the viewpoints.

Façade of Medici Palace is simple and austere. There are many valuable sculptures in the palace, and the manuscript of Dante’s Divine Comedy is kept in the Riccardiana Library.

One of the largest and most important art galleries in the world. In over 45 rooms there are works by artists such as Leonardo da Vinci, Michelangelo, Rafael, Rubens and Rembrandt. If you are interested in European painting, the Uffizi Gallery is a place that you shouldn’t avoid!

The interior of the town hall at Piazza Della Signiora was made in the Renaissance style. There are also many sculptures in the Palace.

We regret not getting there the most. Not because of the Church of Santa Croce, but because in Piazza Santa Croce the Calcio Storico games are held every year. The final of the games takes place every June in this square (in 2020 the games were cancelled due to Covid). Calcio Storico is a sport played every year in Florence since the 15th century. We would describe it as a strange combination of rugby, MMA and football, and of course everything is done without any protection, “barefoot”.

Sport is extremely brutal, but also intriguing – if you want to know more, check out the first episode of the “Home Game” series on Netflix. Four teams representing four parts of the city take part in the competition: the blue “Azzurri” represent Santa Croce, the red “Rossi” Santa Maria Novella, the white “Bianchi” Santo Spirito, and the green “Verdi” San Giovanni. Teams consist of 27 players who don’t get paid for it. To be able to represent a team, you have to be born in Florence, in the appropriate district, people not born in the city cannot take part in the competition. We believe that someday we will be able to miraculously get tickets for this event and see it live!

If you made it to Tuscany – don’t forget to plan visit in Terme di Saturnia!