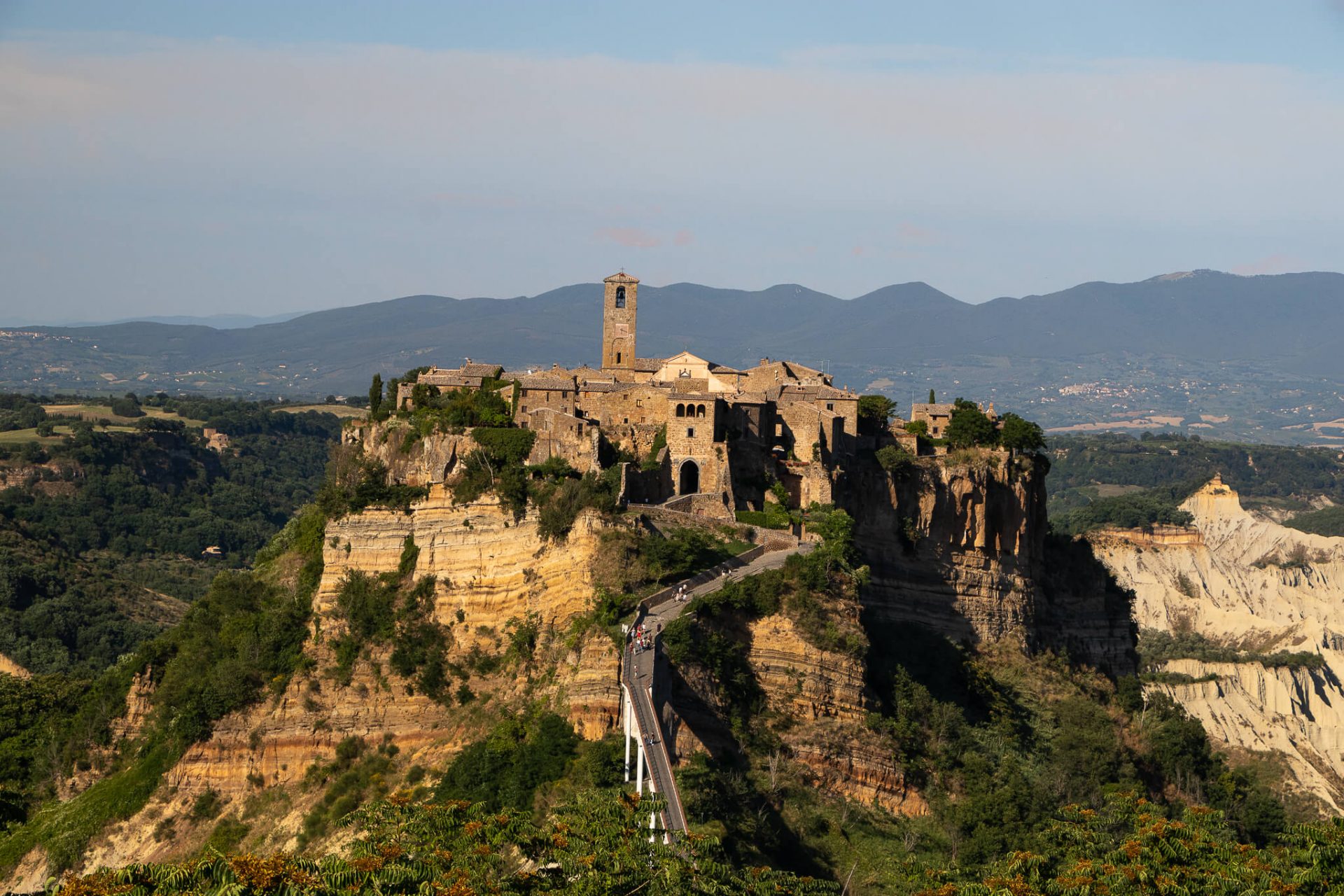 We’re under impression Lazio is an underappreciated tourist region of Italy. Apart from Rome, there are few places in Lazio visited by tourists. We didn’t have much time there, but during our Tuscan trip we managed to find one full day and we want to introduce you to interesting places in Lazio which we think are well worth visiting.

As we mentioned, Lazio was on our way to Tuscany, and that’s because we landed at the airport in Rome. You can read about the most beautiful Tuscan towns in here.

Civita di Bagnoregio is a real gem and an extremely interesting place in Lazio, and not only there, because it seems to us that it’s unique on a national scale. We met quite a lot of local tourists there and learned that it’s not a very popular place among foreign visitors. Civita di Bagnoregio is called the “dying city”, haunted by all kinds of cataclysms for centuries, situated on a rock that is gradually destroyed by erosion.

Originally, we were only planning to visit Bracciano, but one day before departure we did some extra research. It turns out that the photo of the beautiful old town on Lake Bracciano which appears in google search under Bracciano isn’t a photo of Bracciano at all, but of a nearby village called Anguillara Sabazia. You can admire this beautiful view from the beach, where many local tourists lounged in July. If you want something different than regular beach by the sea and definitely more local experience this is it! The beach isn’t huge, but it can easily accommodate everyone, and the view is well worth it!

Bracciano, unlike Anguillar Sabazia, isn’t located on the very shore of the lake, it’s located slightly higher, and the lake can be admired from above. Bracciano made a huge impression on us , we realize the lack of crowds was caused by the corona virus, but it looked like everyone had gone to the beach on Saturday afternoon and we were literally alone there. The Castello Orsini-Odescalchi castle towers over the city, and Bracciano itself is simply a lovely, nice town.

We always associated Castel Gandolfo with the Pope and, frankly speaking, for a long time we were convinced that Castel Gandolfo was the Apostolic Palace itself and nothing else. As it turns out, Castel Gandolfo is a picturesque town situated on a hill, overlooking Lake Albano. The town is really vivid, and due to its close location to Rome and a slightly exclusive atmosphere, it can be described by the Roman Beverly Hills (our observations showed that wealthy Romans would like pop in there over the weekend).

Until 2016, the Apostolic Palace served as the Pope’s summer residence, and from October this year it was opened to visitors (the Pope doesn’t spend his holidays there anymore). Tickets can be purchased on the website of the Vatican Museums.

Where to stay in Lazio?

We spent one night at Gastel Gandolfo, in AirBnb with a beautiful view of the lake. The price was quite affordable for the view you get from the window – in the restaurant next to our apartment, you had to pay a lot for such a view at lunch. The place is run by Edina from Hungary and we highly recommend this AirBnb.

Lazio – where to eat?

We don’t know whether we are always so lucky in Rome and Lazio, or whether the cuisine there is at a really high level. Find our Rome Food Guide here – many of these dishes are easily found throughout the region. During the trip, we ate in two really good restaurants that we can recommend without any hesitation!

Trattoria Da Ilaria – a traditional trattoria in Bracciano with affordable prices (pastes from 7.5 euro), huge portions and really delicious food! To start we took bruschetta with lardo, arugula, walnuts and honey – heavenly door opening in your mouth! Then we decided on our beloved all’amatriciana pasta and gricia pasta. We haven’t heard about the latter before – it can be briefly described as carbonara without eggs. In addition, a tasty and cheap wine (a glass for 2.5 euro). One of the better meals we had during this trip!

Sor Capanna – a pub in Castel Gandolfo where we came from the recommendation of the owner of our AirBnb. Already when approaching the restaurant we knew it’s going to be tasty all tables inside and  outside were full. As an appetizer, we chose zucchini flowers, which were stuffed with anchovies and cream cheese, deep-fried – Dawid complained about the batter being too thick (sometimes he’s fussy about details.. lol), but the whole thing was very tasty. We didn’t eat pizza during the entire trip, so we decided to eat it there. Prices are affordable – 6 to 10 euros for a large one. Pizza is baked there Roman style – on a thin, crispy base. Everything is really tasty and recommendable!