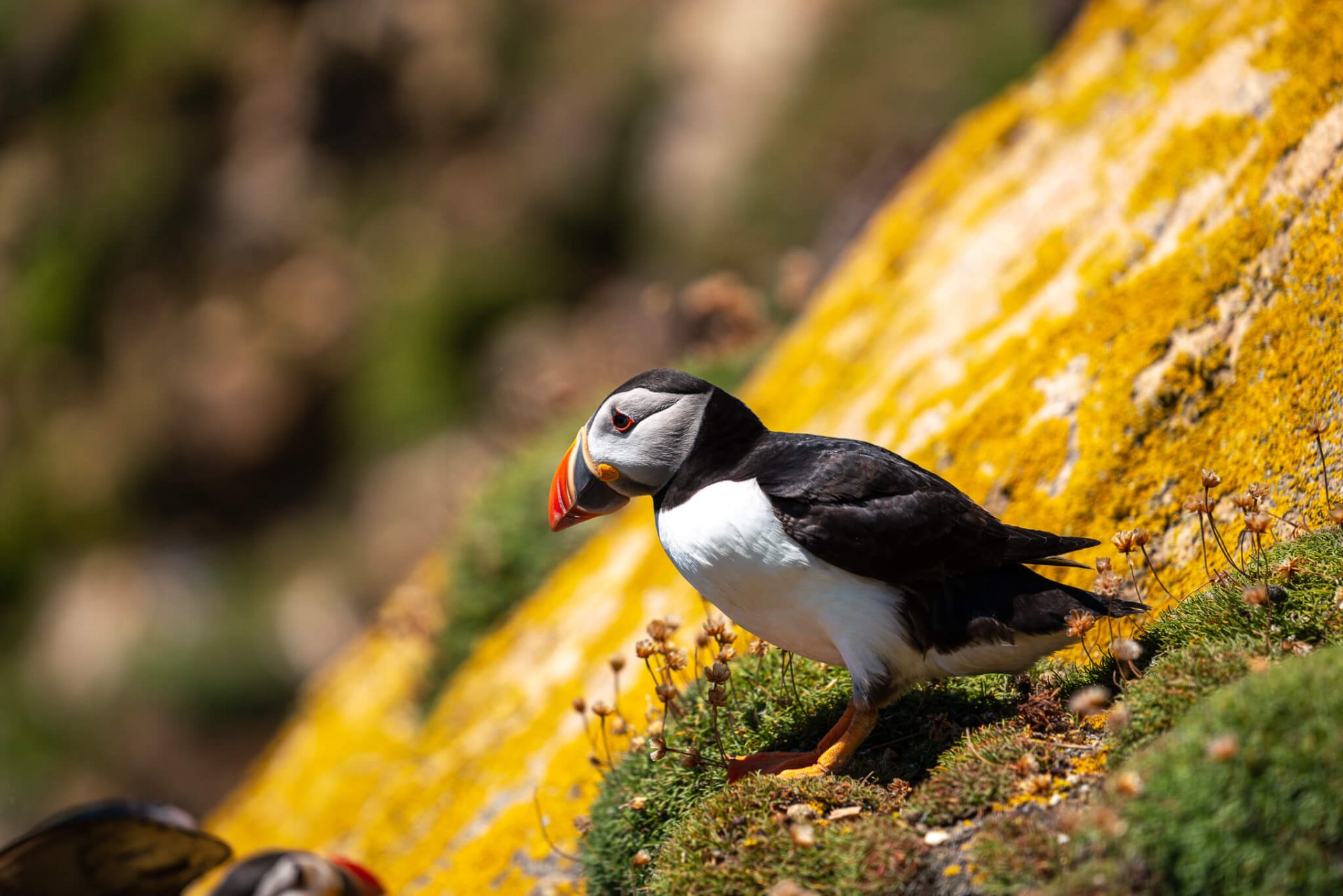 We found out about the Saltee Islands by accident while doing research on puffins. We knew that these cute birds live in the Faroe Islands and Iceland, but we were told they can also be found in some places in Ireland. We searched all forums of ornithologists and photographers and found information about two tiny islands off the coast of County Wexford in the south-eastern part of the island. We liked the Saltee Islands so much that we decided you have to experience it as well!

The Saltee Islands consist of two small islets about 5 kilometres off the coast of County Wexford. The islands have their names – Great Saltee and Little Saltee, shortly speaking big and small Saltee. Their total area is about 1.2 square km., the islands are privately owned and there is exactly one house on Great Saltee. Great Saltee is a bird sanctuary, due to the multitude of birds and the unusual values ​​of the island, a special protected area was created there. The name Saltee has two theories of origin, but the Nordic theory is considered more likely. Salt ey, meaning salt island, comes from the salty mist which occurs from crushing waves in high winds especially in the colder months.

The Saltee Islands are open to visitors, as well as researchers and photographers. When the owners are on their property, tourists on the island are only allowed between 11:30 and 16:30. Camping on the island is strictly prohibited. Apart from the owners’ residence, there is nothing on the islands – no toilets, no restaurants, no shops, so be prepared for this eventuality.

220 different bird species have been documented on the Saltee Islands. The most interesting are of course puffins which attracts the largest amount of tourists – unfortunately we managed to see only one puffin from a distance. Gannets are white birds with unusual, bright blue eyes, we were lucky to hit the breeding period and saw a lot of them from a short distance. There are also cormorants on the island. Two interesting penguin-like species that we saw up close are the razorbill and the guillemot.

We always found bird watching a bit boring and a bit like for nerds I guess. As it turned out – birds in such numbers can be fascinating even to those who are normally not interested in ornithology. In addition, birds are a really grateful, though difficult photographic object. A sunny day in such natural circumstances is a pure pleasure!

Saltee Islands – When To Go

To start with, Saltee Island isn’t just a place for bird watching. We recommend it even if the birds are of no interest to you, but make sure you go on a sunny day. The Saltee Islands are an amazing combination of lush Irish greenery, rugged rocks and the sea, which has a truly amazing green and blue colour. We were blown away by the island itself and trekking there was real pleasure, and the birds were just an interesting addition.

When it comes to birdwatching:

Puffins – Puffins resides on the Saltee Islands from April until early August. However, it’s worth knowing that the best moment to see them is June and the beginning of July. Earlier or later minimise the chances of seeing a large group of birds, we were at the end of July and we saw only one puffin. There is also element of luck involved.

Gannets – present on the island in the summer months, leaves Saltee for the winter. There was a lot of them at the end of July! We came exactly when birds were hatching the eggs, it’s important then not to approach the nests less than 6 meters.

Razorbill – present from March to the end of July, we were at the very end of July and we confirm they were there.

There are many birds on the Saltee Islands throughout the year, but we encourage you to come in the summer. June or early July on a sunny day is the best option.

Ferries depart from Kilmore Quay to the Saltee Islands, and more specifically to Great Saltee. The ferry normally takes 24 people on board, but during the coronavirus this number was limited to 12 people. We paid 30 euro per person for the cruise, it’s good to reserve seats upfront in high season. The ferry takes tourists to the island and picks them up at a certain time. You can make a ferry booking here.

You can find a lot of information about the island and a helping hand from the Visit Wexford tourist organization.

The stay on the island is usually 3-4 hours, the boat takes about 20-30 minutes one way. There are no amenities on the island, so you need to stock up on food and drink. There are also no toilets, asphalt paths, not even a specific port. Binoculars and sunscreen will also come in handy (the sun burns really fast there). Boats come close to the shore and then you are taken to little pontoon with a motor which drops you on the shore on slippery rocks. For this reason, it’s not a friendly place for families with small children (a pram is rather a bad idea), the elderly and the disabled.

There are no safety rails on the island and you have to be careful not to fall down the cliffs. You should also watch out for hare burrows, which sometimes collapse under the weight of the body. Please consider all safety measures as it may take some time for emergency services to reach the islands.

Information that may be useful to more sensitive people – there are thousands of birds on the island that naturally have to defecate. In other words it smells a lot in close proximity to birds colonies. It’s also worth remembering not to approach bird nests closer than 6 meters – such actions may result in abandoning the nests by parents and leaves chicks open to predators attacks.

If birdwatching is not your cup of tea you can always visit Mizen Head, Beara Peninsula or Connemara!