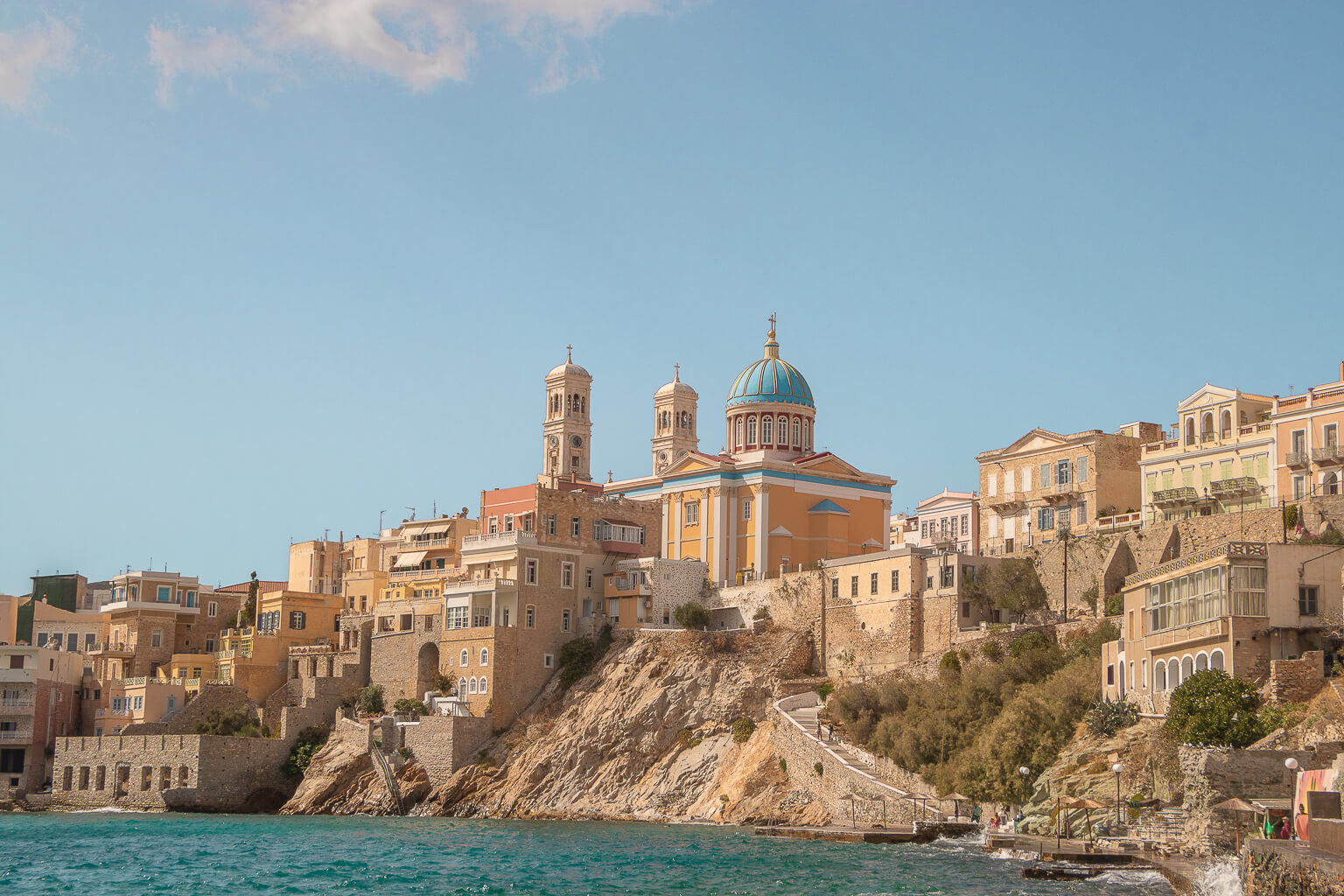 WHAT TO SEE IN SYROS – ERMOUPOLI – GREECE

When we first saw pictures of colorful Ermoupoli, the capital of Syros, we knew that if we ever landed in the Cyclades, we wouldn’t let this place go. We had to flex a bit, because in October during covid, ferries in the Cyclades didn’t run as often as usual. However, we managed to get to Syros from Athens and start our Cycladic adventure! In today’s post, we reveal what to see in Syros, and more precisely in Ermoupoli.

Ermoupoli is the capital not only of Syros, but also of the entire Cyclades and the South Aegean region. The city is inhabited by 14,000 people and has a slightly less touristic climate compared to other islands, especially to Mykonos or Santorini the difference is quite big. In short – you can feel that “normal” life is going on there. We really wanted to stay longer on Syros, but we had 1.5 day only, so we focused on the island’s capital. The island is located 18 km from Tinos and 34 km from Mykonos.

How to get to Syros?

You can get to Syros two ways: by ferry or by plane (you can also get a private yacht, but you know…). Only the Greek Sky Express line flies to Syros, you can get there from Thessaloniki and Athens. The airport is located 3.5 kilometers from Ermoupoli, but there is no bus service there, so probably your only options are a taxi or a rental car.

The second option is ferries, it’s easy to get there from Athens, Mykonos and Tinos. From the last two, you can easily organize a day trip. You can search for ferries here, prices may vary depending on the carrier (the largest BlueStar ferries, which are the slowest, are among the cheapest) or the season. The length of the cruise varies depending on the carrier, the largest ferries sail less often and are the slowest, the plus is that you can take your car with you. Small ferries run more often and are faster, but often twice (or more) more expensive than the slower ones. By ferry you will get to the city itself, because the port is located in Ermoupoli.

As already mentioned – from Mykonos or Tinos you can get there in less than an hour, so it’s possible to organize a one-day trip. We recommend staying overnight – accommodation and food are much cheaper there than in Mykonos. One day is sure to be enough to see everything in Ermoupoli. As an island, Syros isn’t one of the largest, so 3-4 days for the capital and exploring the corners of the island should be enough.

What to see in Syros? – Places we visited

Let’s start with the fact that we visited not one, but two towns. Ermoupoli is the colourful capital of the island, relatively “new”, because it was built in the 1920s during the Greek War of Independence. Ermoupoli located right by the sea was an extension of the existing Ano Syros, which is located on a hill behind, without direct access to the sea. The roots of Ano Syros go back to the Middle Ages, so you can call it “the old town”. However, administratively, they are two different places.

Before we get to the list of things worth seeing, we wanted to mention that both Ermoupoli and Ano Syros are fun to just “hang around”. One day is enough to see all the attractions, as well as to stray from the beaten track and get lost in the streets.

Miaoli Square – What to see in Syros?

Miaoli Square is the main square in Ermoupoli with the town hall towering proudly over it. The square is the central point and it’s hard not to find yourself there least a few times. You can stop there for a coffee or beer, watch the kids playing and observe the city life.

Ermoupoli Town Hall – What to see in Syros?

As mentioned above, the City Hall is located on Miaoli Square, the city’s main square. The building was built in 1876, and since 1899 it has also been the site of the Archaeological Museum.

St. Nicholas Cathedral – What to see on Syros?

The characteristic yellow church with blue dome from our photos, which always stands out from the Ermoupoli panorama, is the Cathedral of Saint Nicholas, Orthodox of course. The cathedral was opened in 1870, and inside there are relics of St. Nicholas, who is the patron saint of Syros. Also inside is the painting of the Dormition of the Virgin, the first painting by El Greco. Definitely one of the most beautiful churches we’ve seen.

Asteria Beach – What to see in Syros?

Calling Asteria a beach is a bit of an abuse, the term “city beach” would be a bit more accurate. Asteria is simply a concrete part of the wharf with several ladders installed that allow you to get into the water. The view from Asteria is beautiful, you can see Ermoupoli and St. Nicholas Cathedral in the foreground.

During the season there is a pub, or rather a beach bar where you can order something to drink, in the off-season you have to rely on yourself. Walking along Asteria, we passed the house of an elderly Greek who was grazing … ducks in front of the house. The ducks are splashing happily in the sea and are found in every 2nd photo from Asteria Beach. When you want to go swimming, it’s worth taking water shoes wit you because of the sea urchins hidden among the rocks.

Sta Vaporia – What to see in Syros?

Vaporia is a picturesque district of Ermoupoli, this is where Asteria and the Cathedral of St. Nicholas are. There are many stately properties in Vaporia, some of the houses are “suspended” above the water, a bit like in Little Venice on Mykonos.

Church of Christ’s Resurrection – What to see in Syros?

The Church of Christ’s Resurrection is located on the hill of Vrodados and towers over Ermoupoli. We suffered a lot in heat to climb the hill, but it was worth it. From there you can see the whole city and the Aegean Sea.

Apollon Theater – What to see in Syros?

Unfortunately, we weren’t inside, but it’s worth mentioning. The theatre located in an inconspicuous building was erected in the years 1862-1864. It’s said that Apollon is Milan’s La Scala in miniature, but its architecture was also influenced by several other Italian theatres.

St. George’s Cathedral – What to see in Syros?

St George’s Cathedral, located at the top of the hill in Ano Syros, was unfortunately closed during our visit. However, walking up thru local streets of Ano Syros is an attraction itself, not mentioning panoramic views all around .

What to eat in Syros?

Loutza is a pork tenderloin cured with spices, cinnamon and nutmeg produced on the island. When it’s “fresh” it tastes and looks a little bit like spicy cooked ham, you can refrigerate it for a few weeks to keep it fresh. Loutza is also suitable for aging, the longer it is stored, the more it dries up and becomes similar in taste to Italian prosciutto. Leave it outside fridge and in 3 months will be dried.

Most importantly, the Syros loutza, which is produced on the island, can only be bought from a butcher (the pieces are unfortunately huge, and they cannot be sold in smaller ones). Vacuum-packed loutza is often sold in shops selling local products and souvenirs, but it’s produced on other islands and tastes rather different.

San Michali cheese is a cheese called Greek Parmesan. It has been produced using the traditional method for over half a century from the milk of cows grazing on Syros. The cow’s diet, rich in herbs, is responsible for the cheese’s unique flavour, which is slightly spicy.

Where to eat in Syros?

Μικράκι Καφέ-Ταβέρνα (To Mikraki) – a tavern found by accident turned to be a true gem! We got encouraged to take a seat by the fact there were many locals having a bite. We ate a delicious taramasalata (roe paste) and a gyros. For two snacks, two portions of bread, one main course, a litre of wine and a coffee, we only paid 27 euros and we were full to the cork! We got ice cream for dessert for free.
Address:
&, Φολεγάνδρου και Θερμοπυλων (corner of Folegandrou Street and Thermopilon Street)

Πιτακι Bar – a small bar serving gyros in Miaouli Square. After a hearty lunch, we weren’t supposed to eat too much, but it didn’t work out again, and we took the leftovers with us for breakfast. We ordered vegetables (slightly overcooked) souvlaki with halloumi and the other with lamb, two portions of pita, dip, cola and a litre of wine – all cost 23 euro.
Address:
Χίου, Ερμούπολη 841 00
Chiou, Ermoupoli 841 00, Greece

Παραδοσιακά Προϊόντα Πρέκας (Traditional Products Prekas) – a shop with local products, the owner buys them from producers from all over the island, and also imports products from other islands. You will buy loutza there, but not the one from Syros, various cheeses, wines, olives and a whole lot of other delicacies that you can bring home with you as a gift or just have it yourself!
Address:
Chiou 4, Ermoupoli 841 00, Greece
Χίου 4, Ερμούπολη 841 00 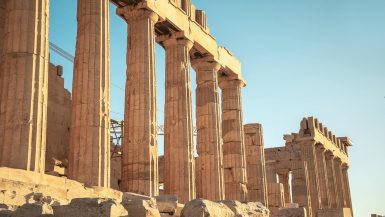 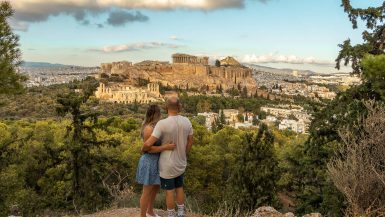