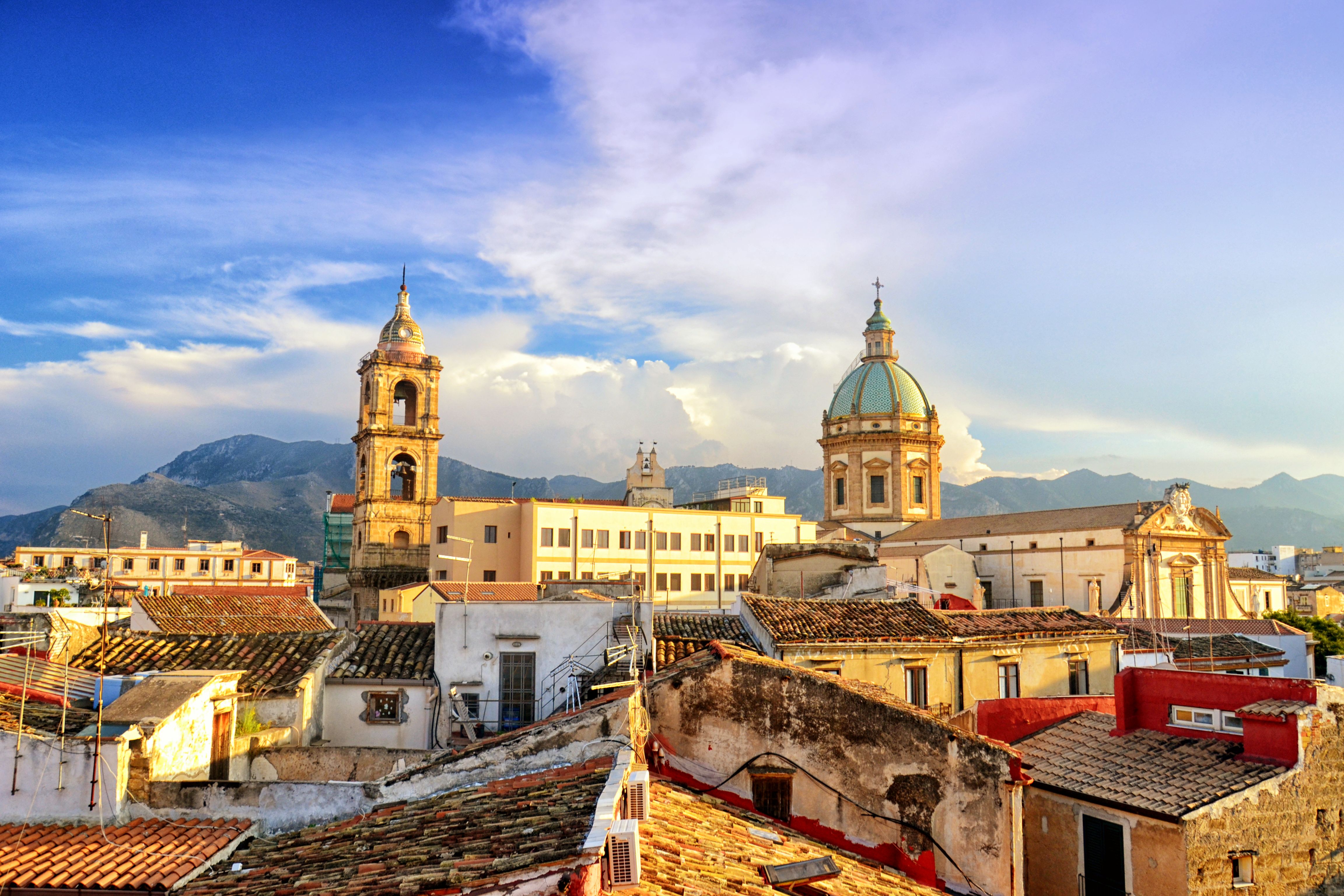 Traffic in Palermo seems to have more in common with Asian city than European one. Tuk tuks and street markets with shouting traders, cacophony of sounds and palette of odors isn’t typical European sight. Chaos which characterized cities of South Italy electrifies and draws, we were swallowed up completely.

After heavily filled itinerary in Rome we didn’t really have plan for Palermo. It couldn’t turned out better, we were wandering streets without objective, visiting markets, literally tasting Palermo and passing by another monuments.

Straight after dropping our bags in a hotel we hit streets of Palermo. First we visited Ballaro market. Old town in Palermo divides into 4 sections where every each of them has its own market. Generally they have a central point on some piazza, but most of stalls outstretch streets leading to it. Most of them operate from early morning until midday or 1pm, and then in the evening again with majority switching from selling products to ready meals. After entering Ballaro market we found ourselves beside seafood stall selling dishes ready to eat on a small plastic plates. Steam was billowing out of a huge pot where fresh octopus straight from a boat was simmering. We bought 2 plates one with sliced octopus and slightly marinated anchovies served only with olive oil, lemon and parsley. Definitely one of the best we have ever tried and cost only 2 euro per plate. Market was joyfully overwhelming, loud and noisy. We spotted some dried herbs which we always bring from Mediterranean. You could buy vacuum packed cheese, dried ham, olives or pistachios and capers which helps bringing them home.

From the market we went to restaurant – for more food. Antica Focacceria San Franceso which apparently is the oldest in Palermo and the décor hasn’t changed much since early days. We scoffed down Pane Con Milzo which is traditional dish made from bun stuffed with 2 types of cheese and spleen as well as pizza sfincione. Bun was only 2.5 euros and was filled with stuffing, Sicilian pizza with onion and tomato was 3.5 euros –another argument to try offal.

After food and market shopping we decide to go back to the hotel to get some rest. In Rome we walked 60km in 3 days and we could feel it in the legs. We chilled on our balcony with amazing view. Munching on olives, cheese, bread and wine, not to mention just got back from the lunch. When on holidays our stomachs have no time off.

Our hotel warden – lovely Barbara gave us city maps with marked must see points. She also explained Palermo is a city of a few monuments to see and few places to chill and relax. We started from Quatro Canti, intersection of 4 streets where you can find 4 baroque palaces. From there took a short stroll to Piazza Pretoria with Fontana Pretoria, Fountain of Shame. On the plaza you are surrounded by baroque domes covered in colorful tiles shinning in the sun. Marriage of two cultures, European and Arabic creates unique architecture and one-off feeling of the city.

Pedestrian access only Via Vittorio Emanuele is great for a walk. On the way you can see Cathedral which is enormous and makes huge impression. We went towards Villa Bonano park and gone through main city gate Porta Nuova. You can see the Castle in a distance but we headed towards Teatro Massimo where we stopped for a coffee. After we lost ourselves in small streets and finished few hours’ city tour in a port.  It isn’t any spectacular but you can enjoy sipping cold Grilo in one of the bars while marine breeze moves your hair.

Palermo should be seen from the top, shining with gold and green baroque domes which contrast with mountain ranges in the distance. We don’t regret money spend on accommodation as we spent the whole evening on the terrace drinking wine and admiring the view. In Palermo you can see all monuments in one day or just sit, relax and soak the atmosphere of this unconventional city. 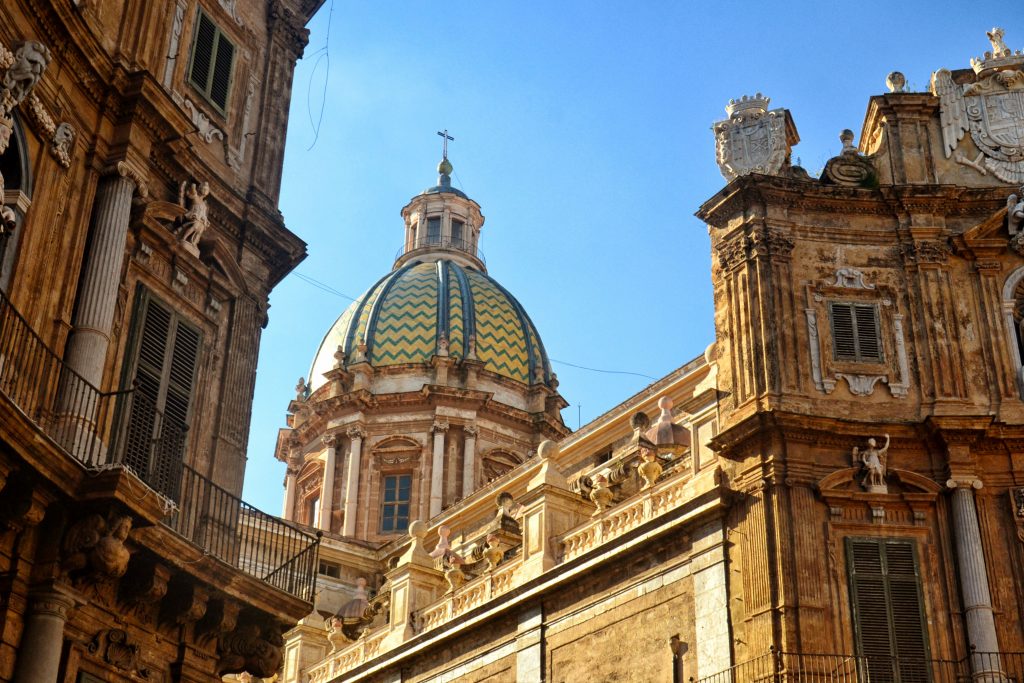 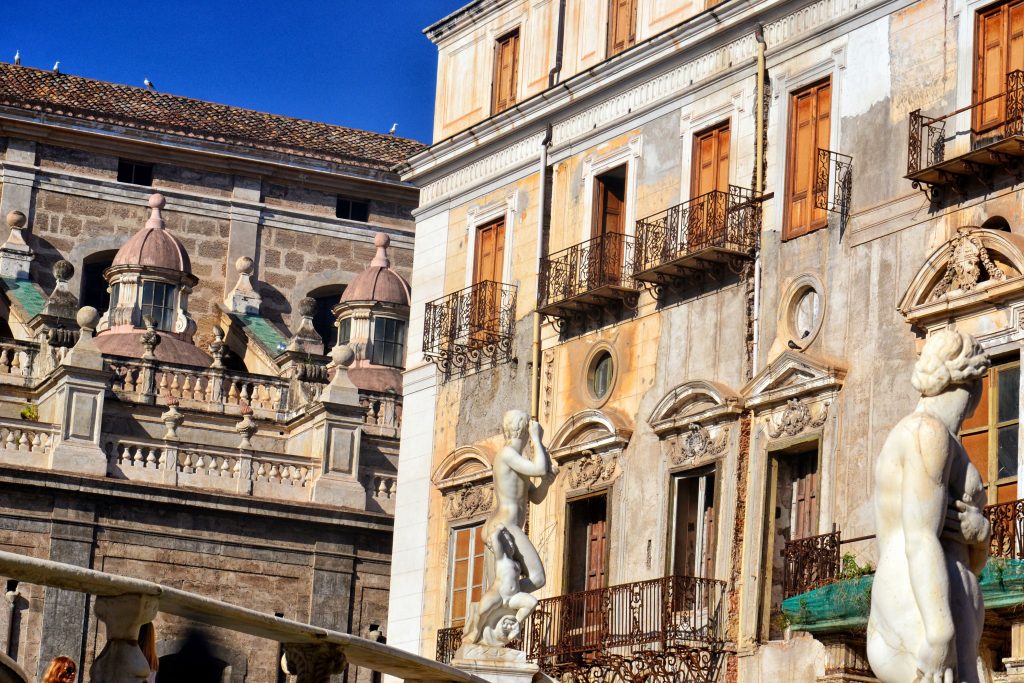 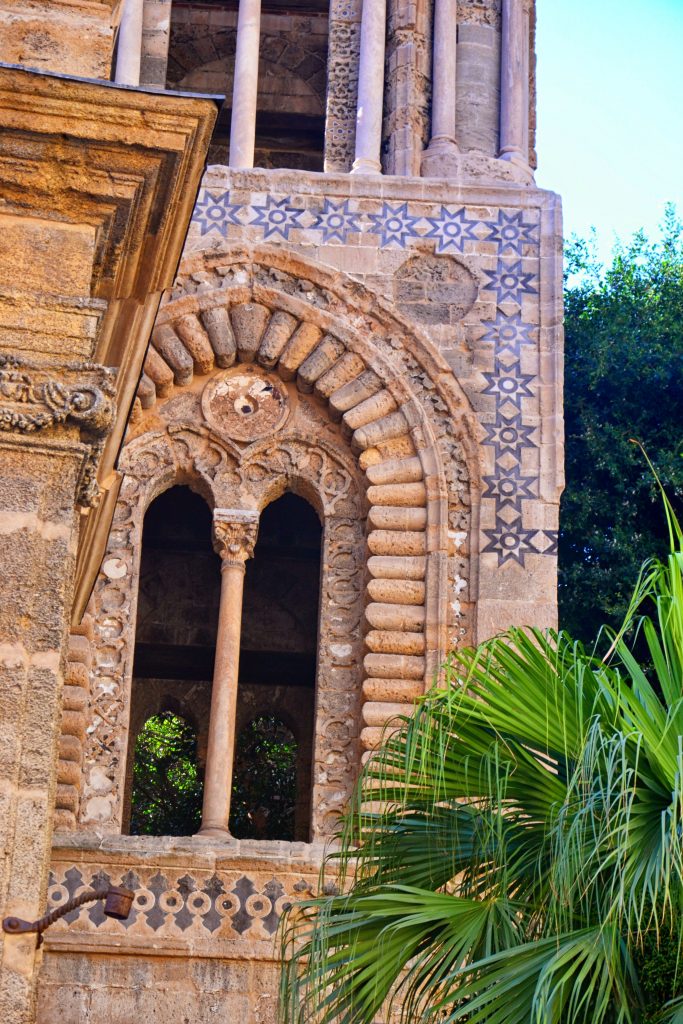 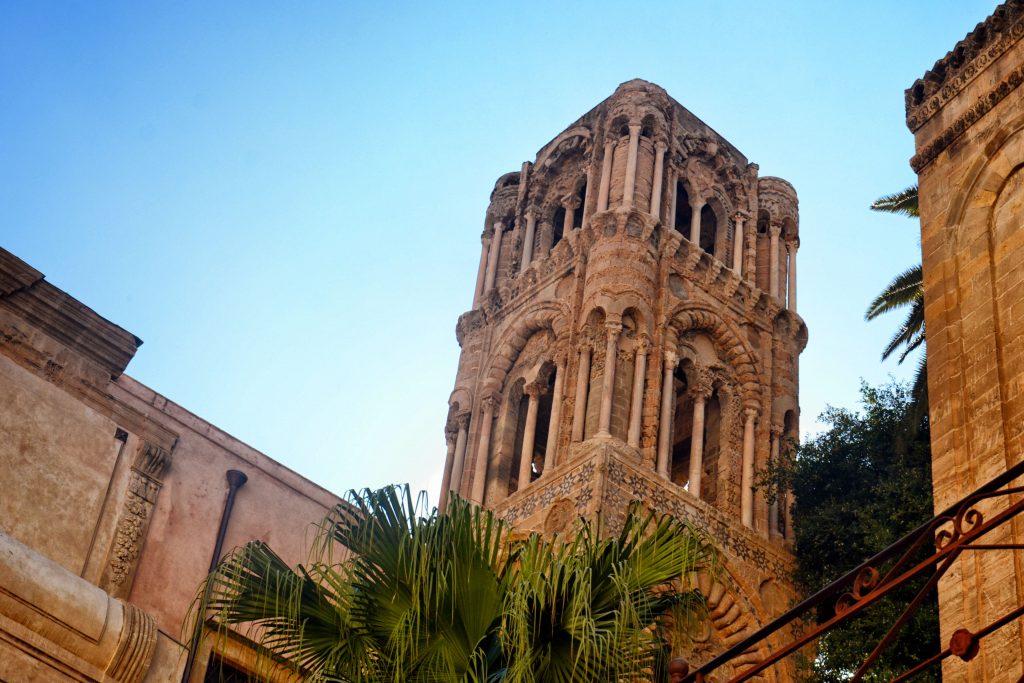 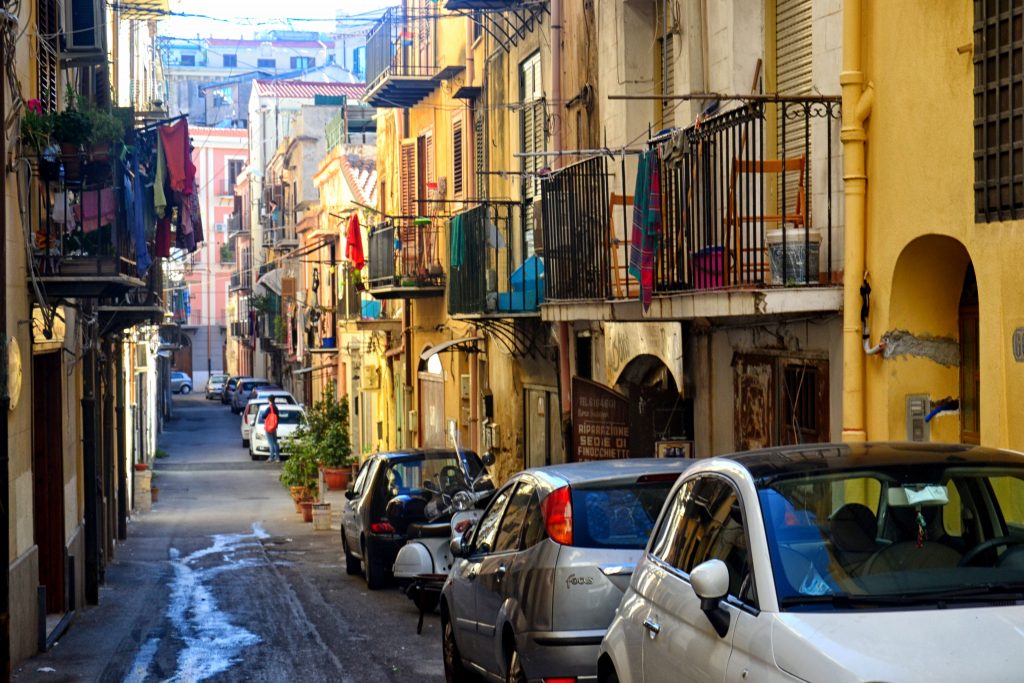 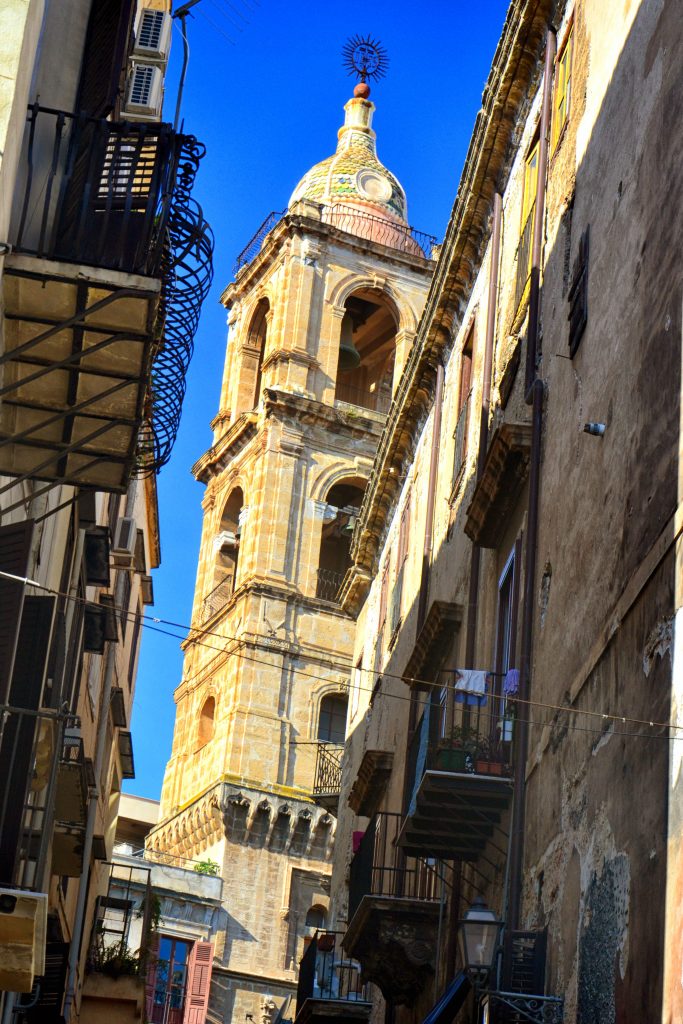 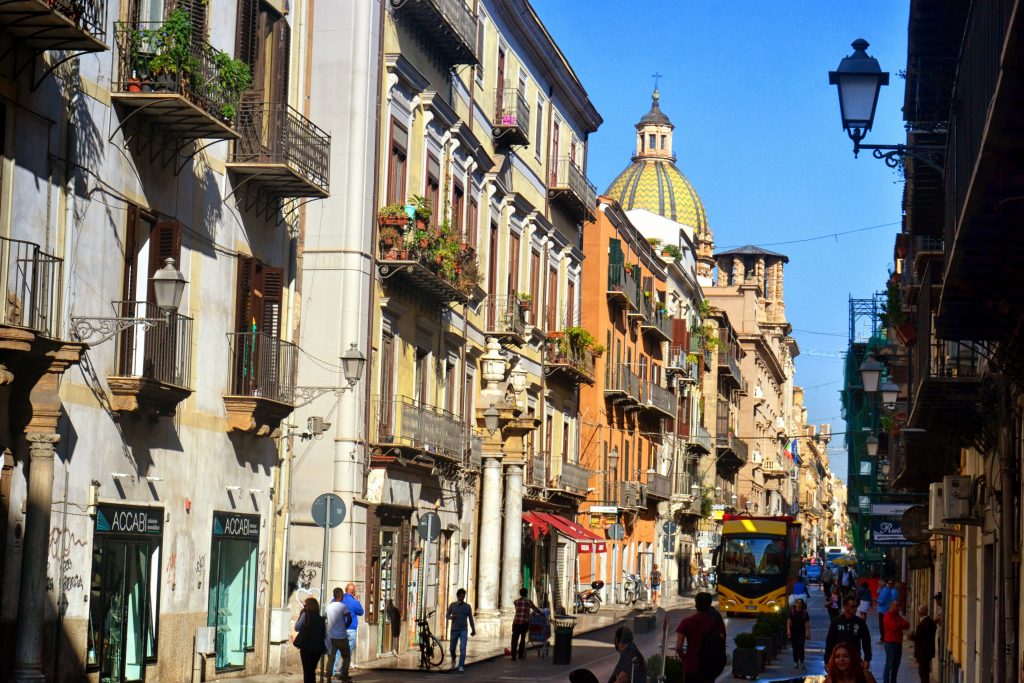 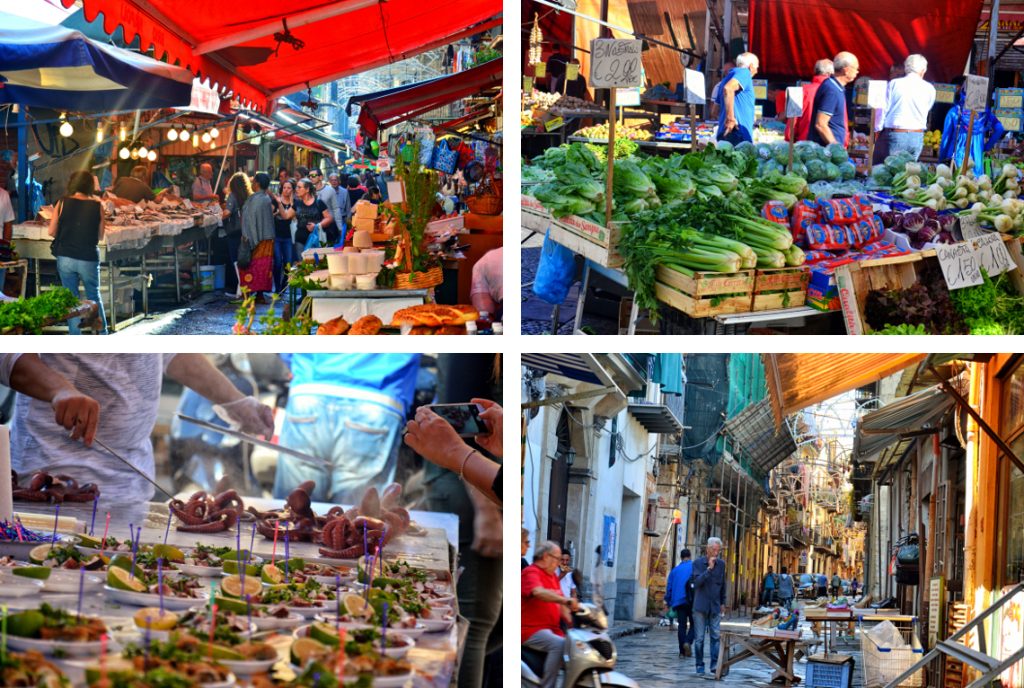 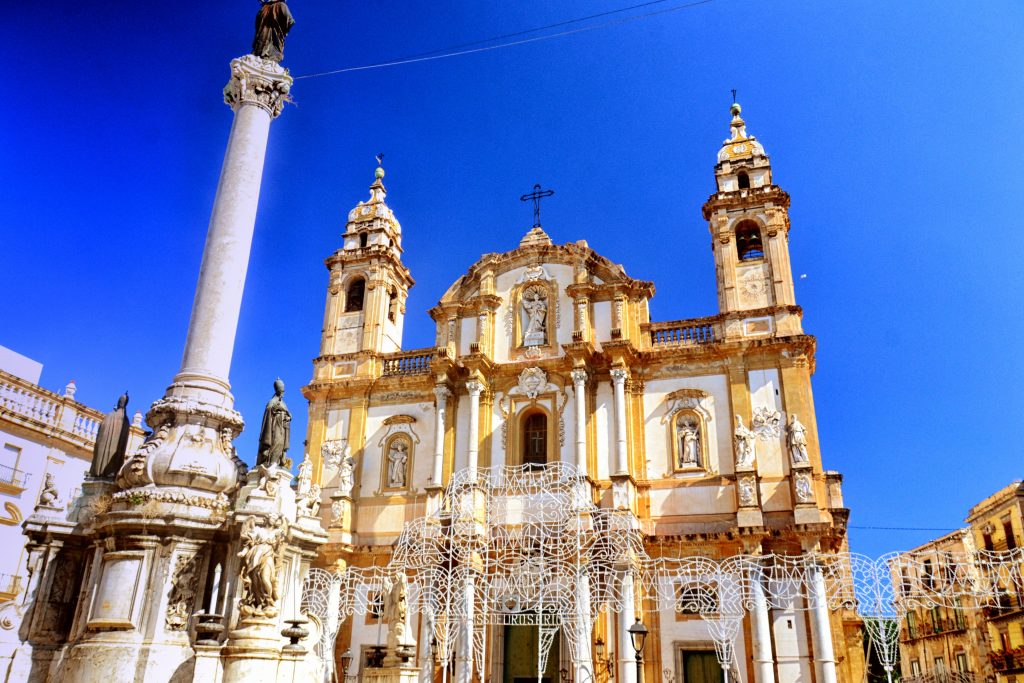 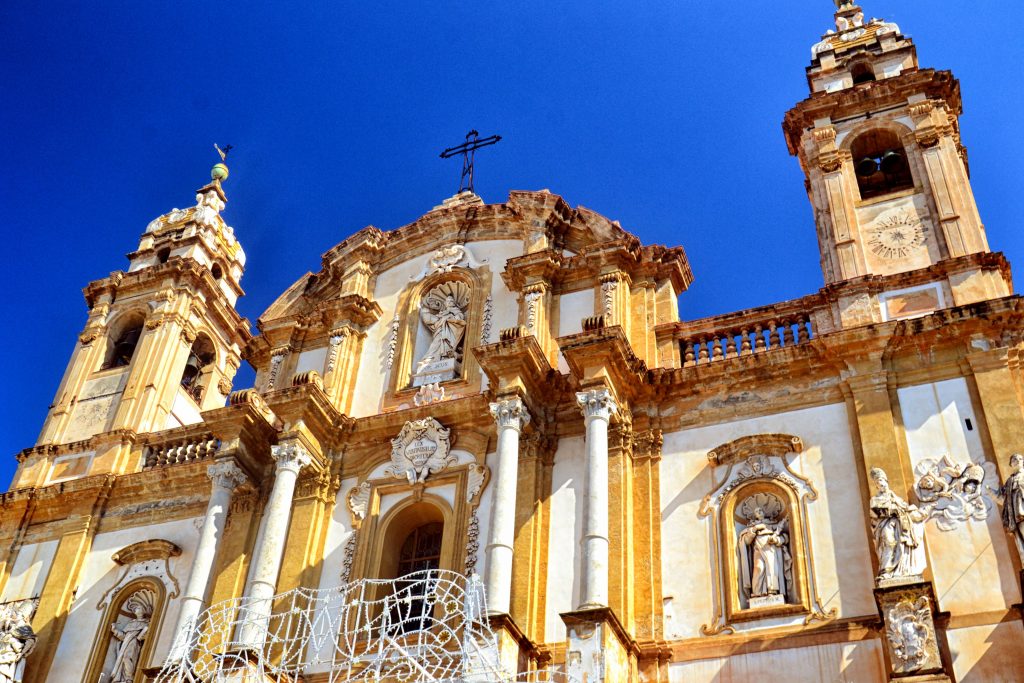 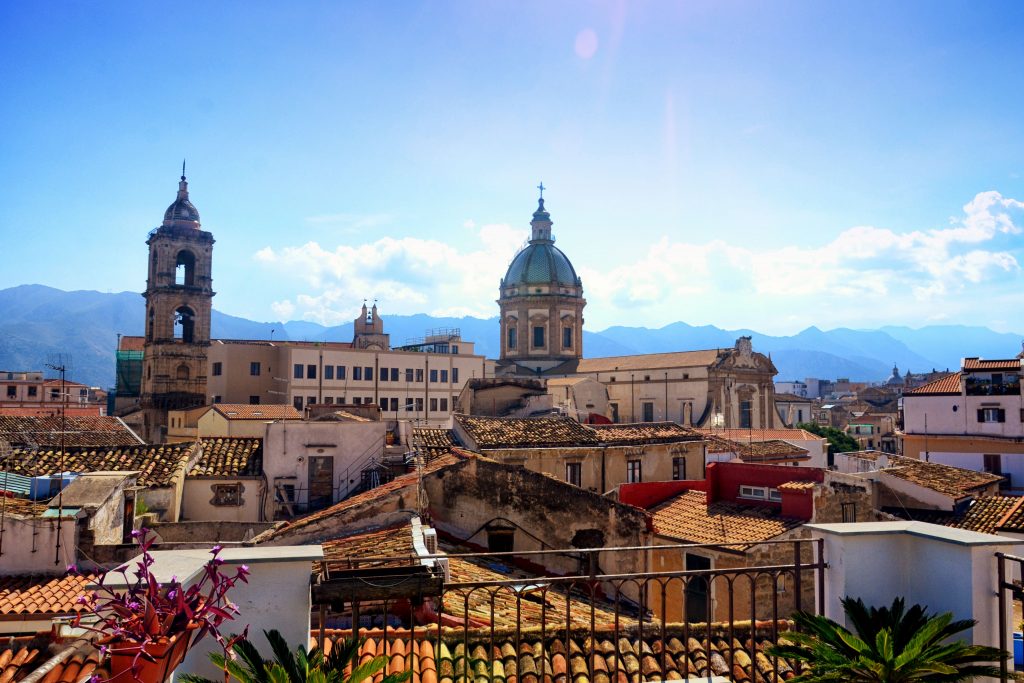 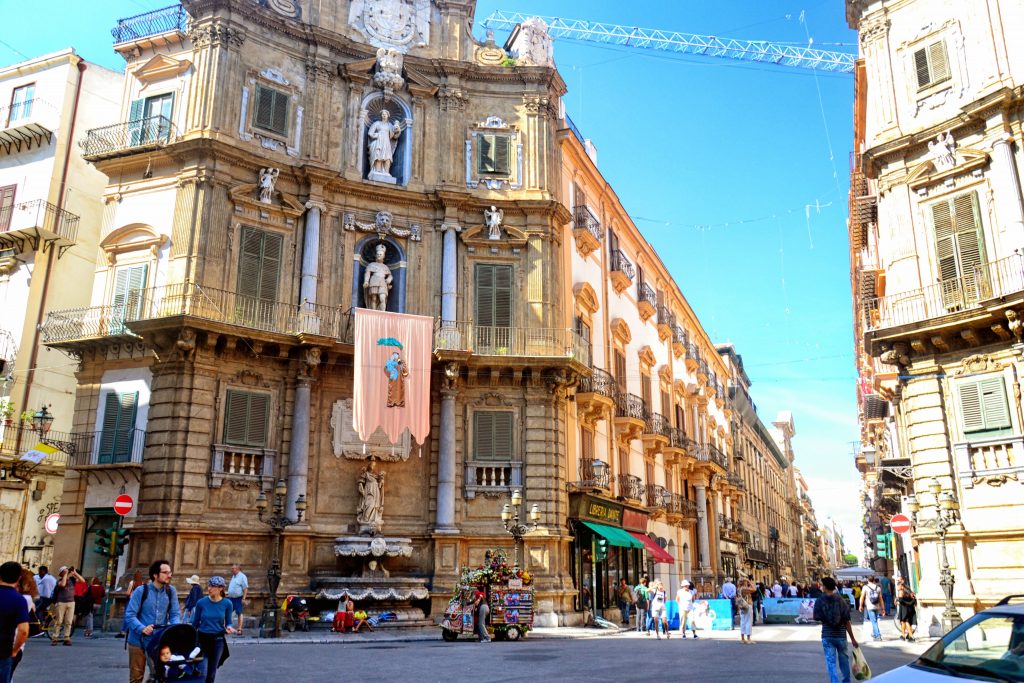 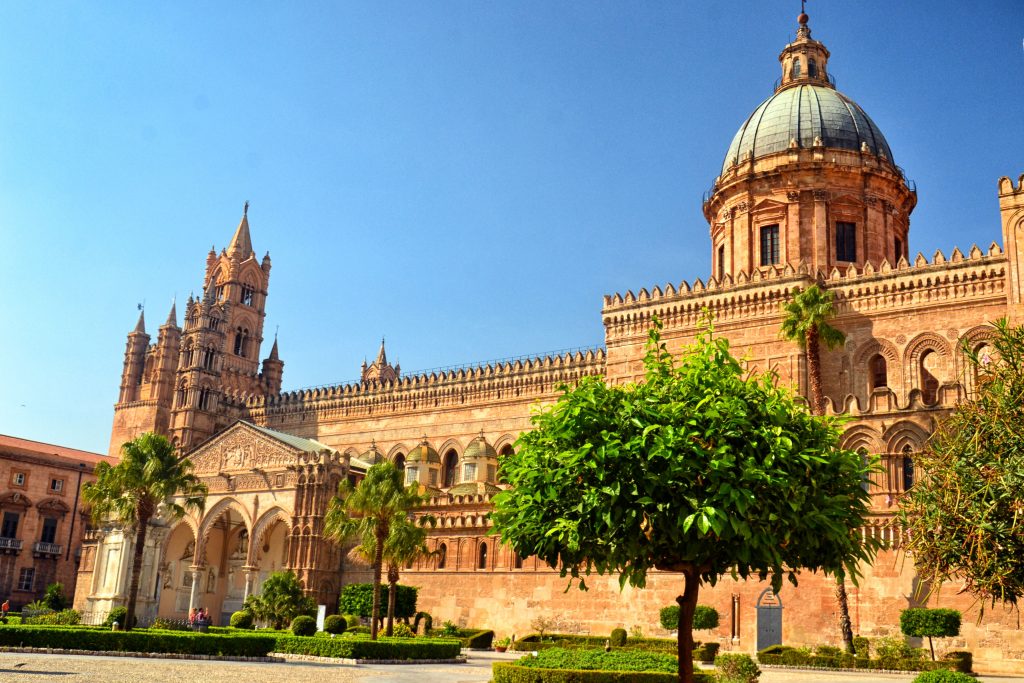 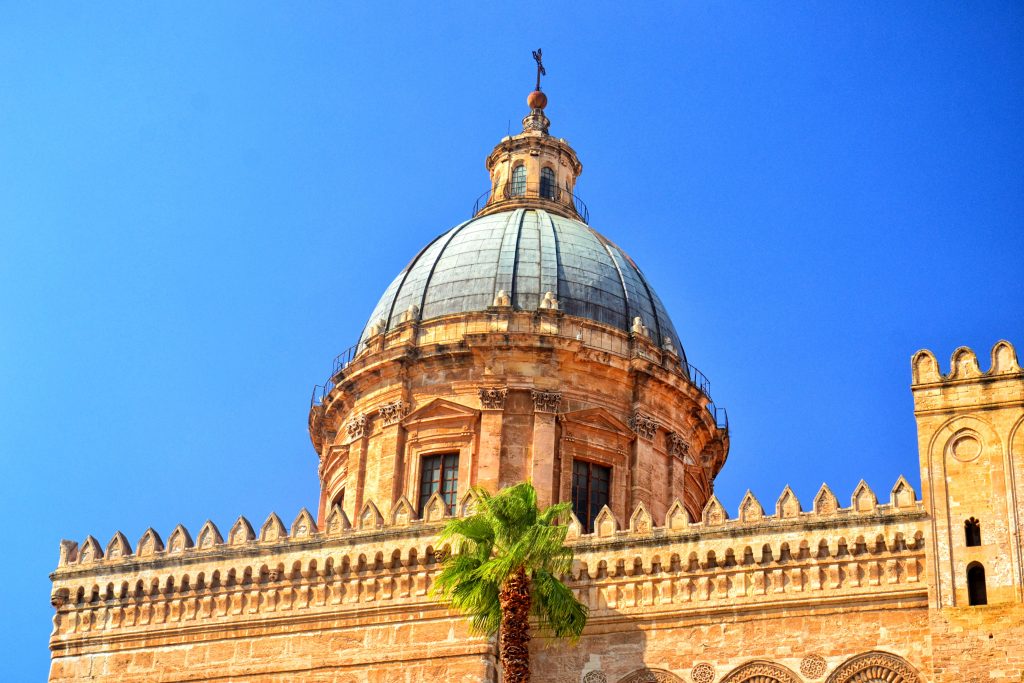 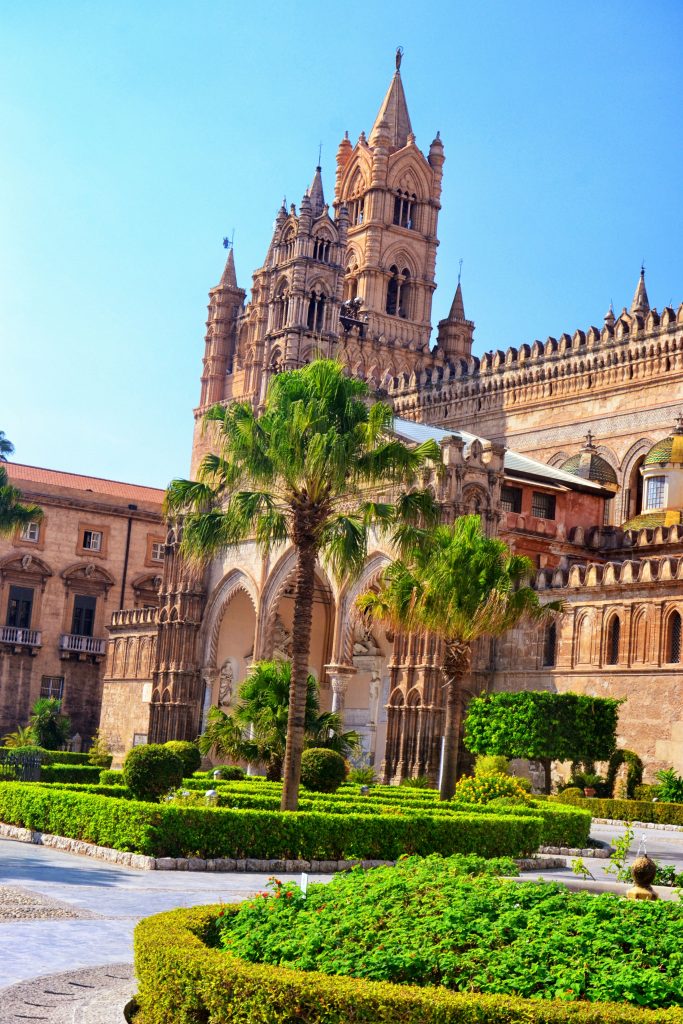 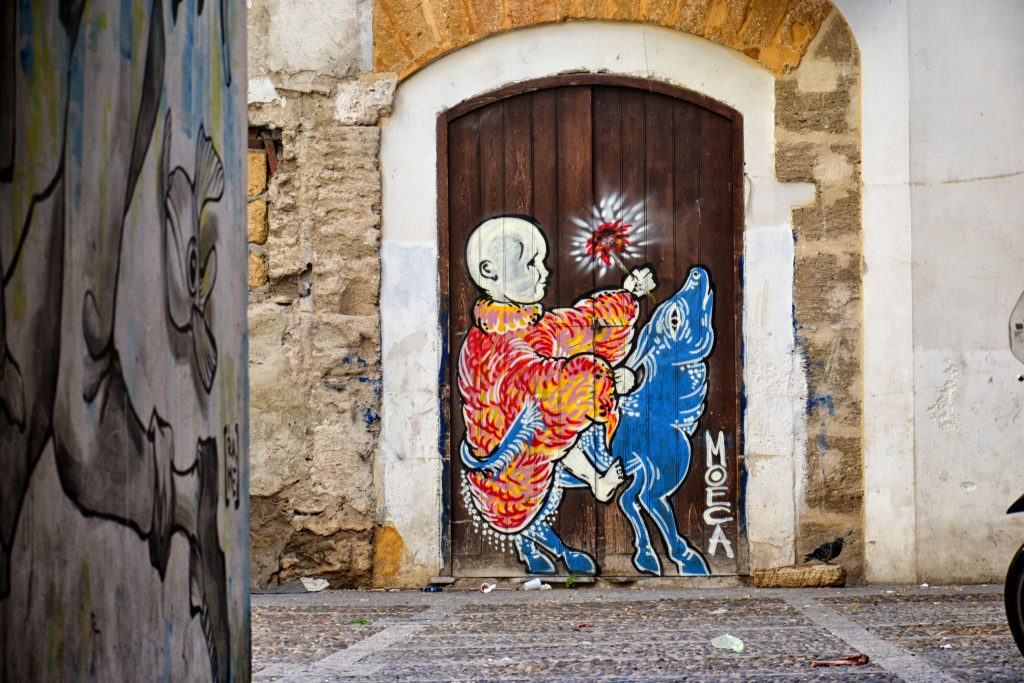 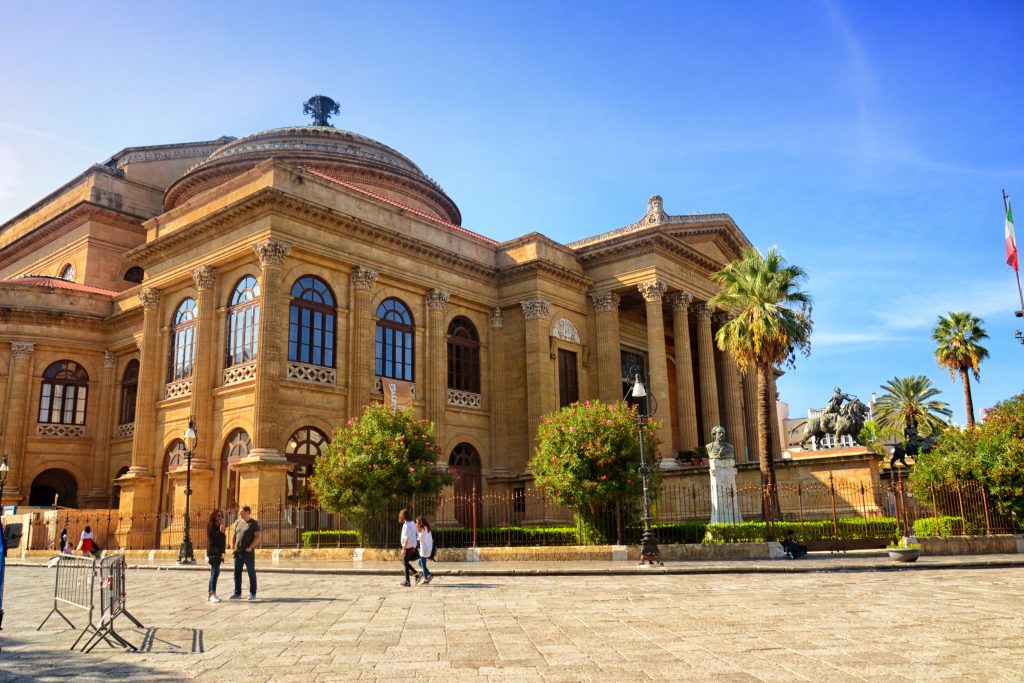 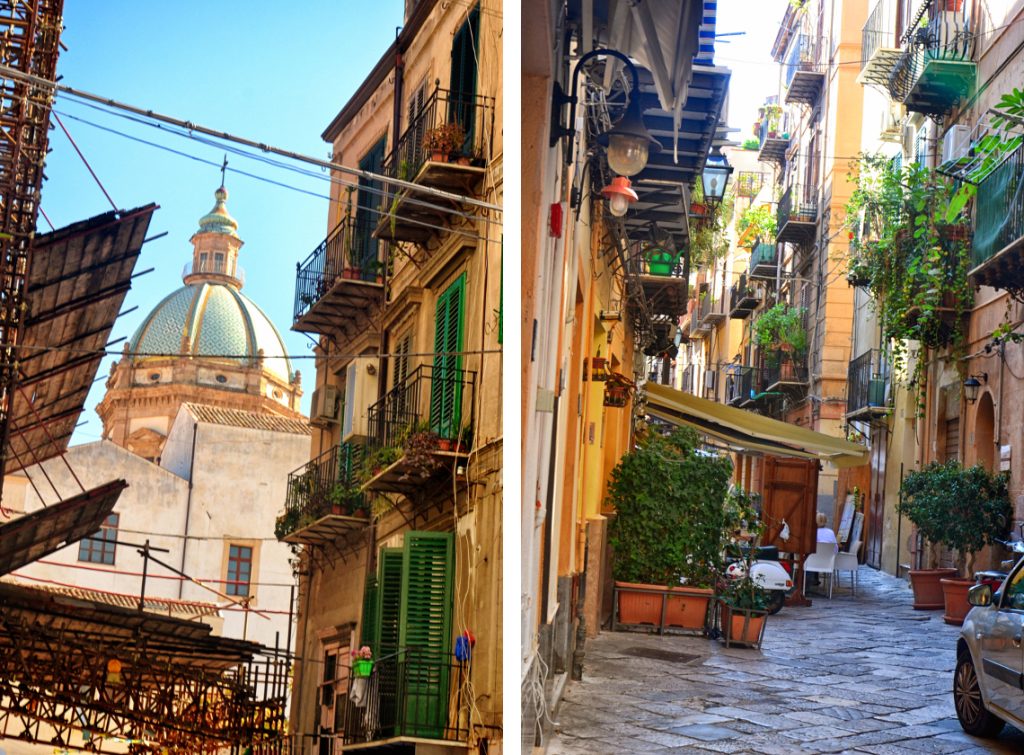 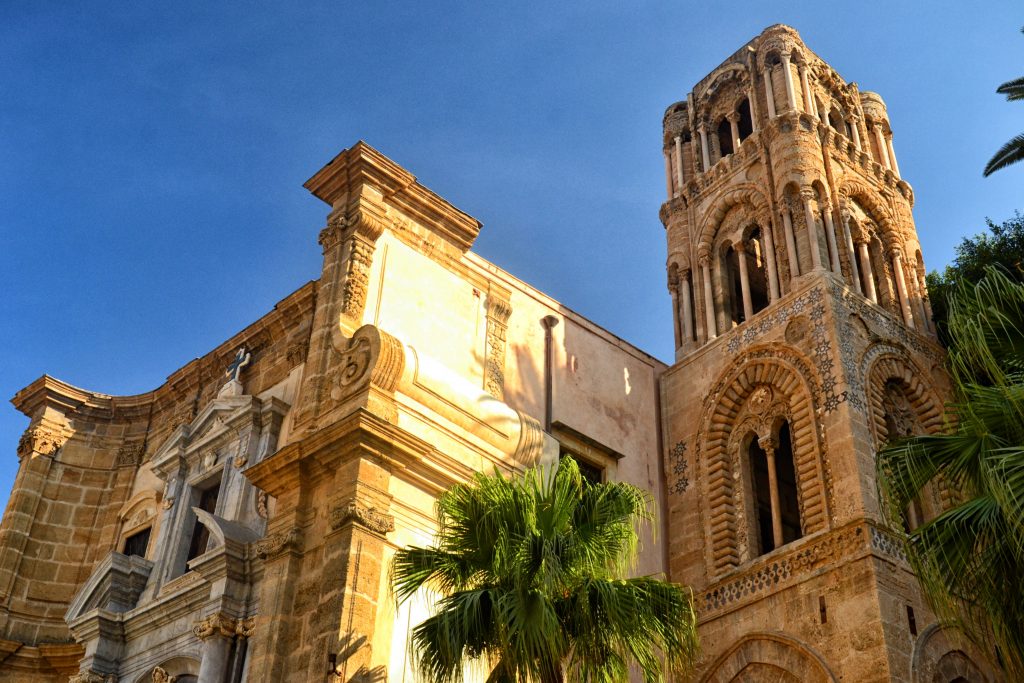 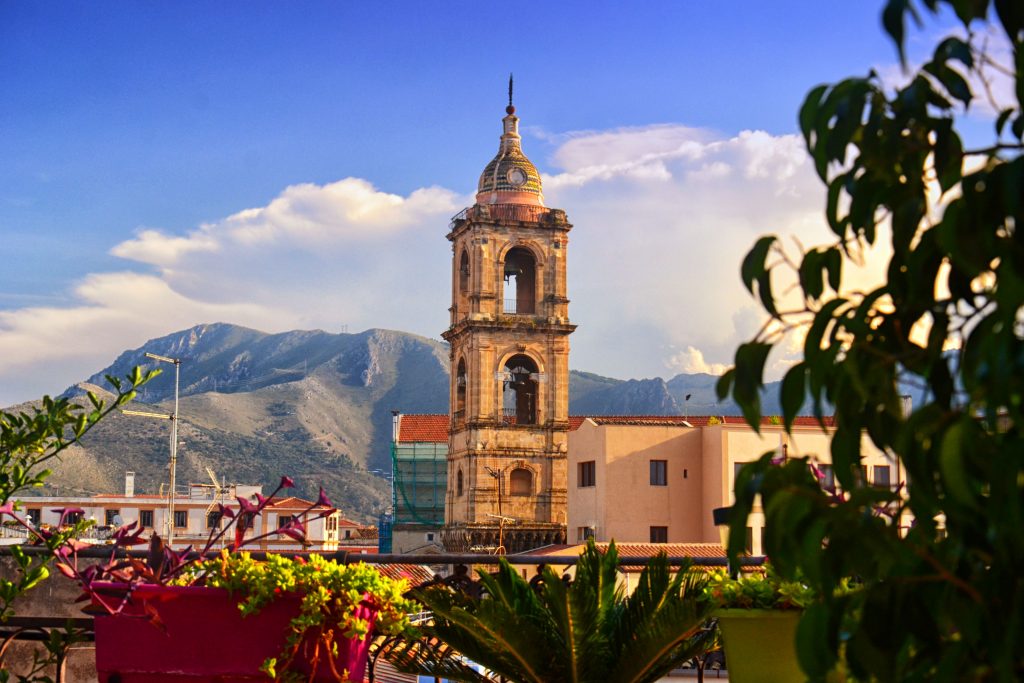 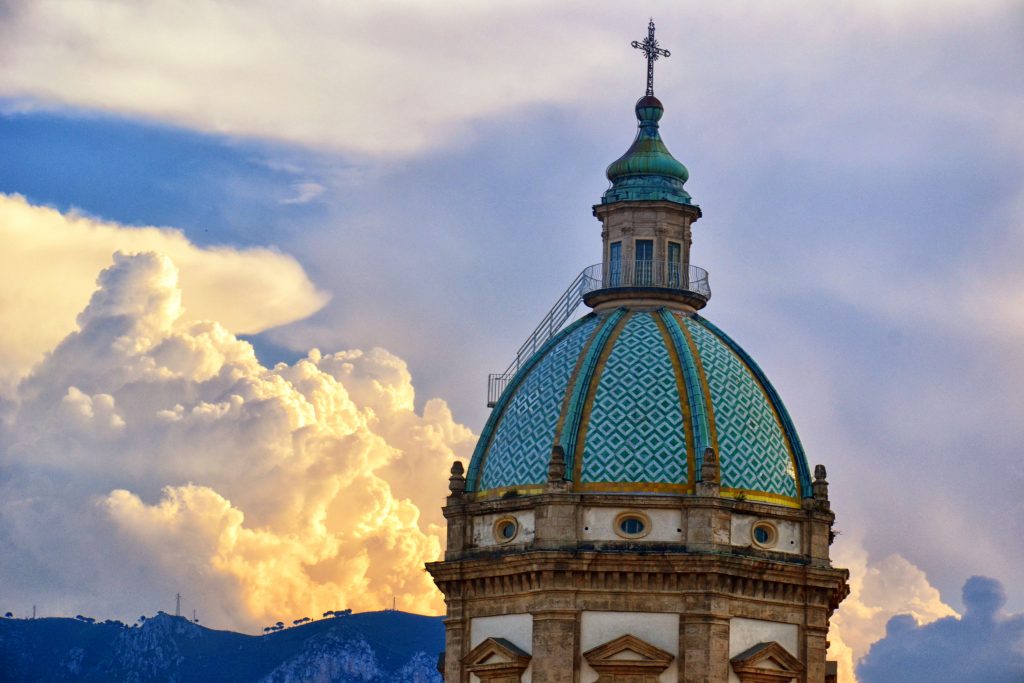 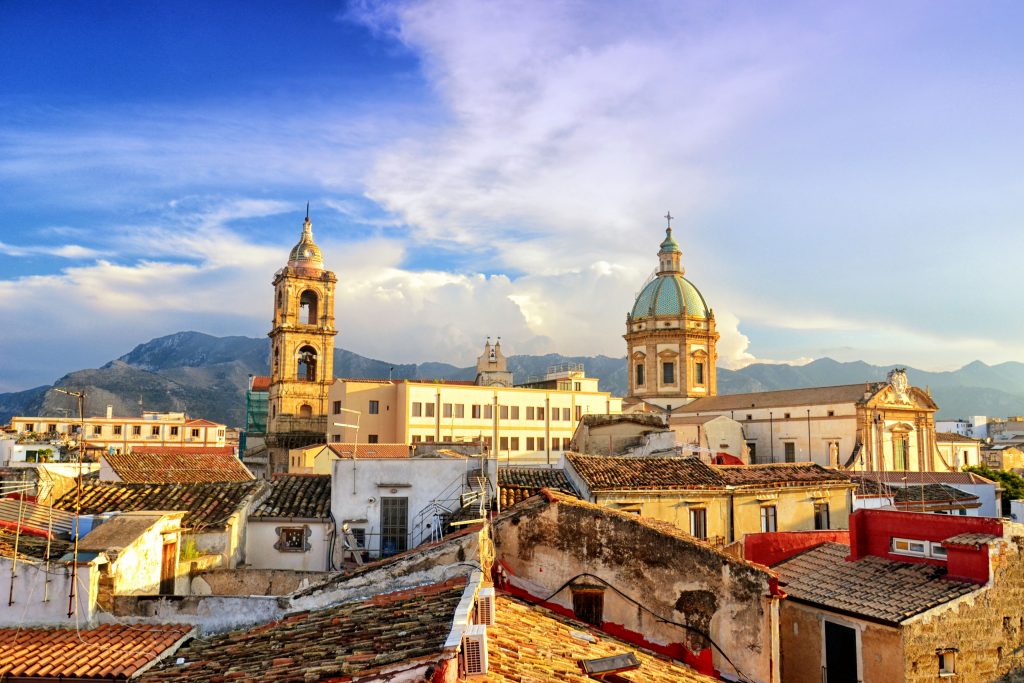 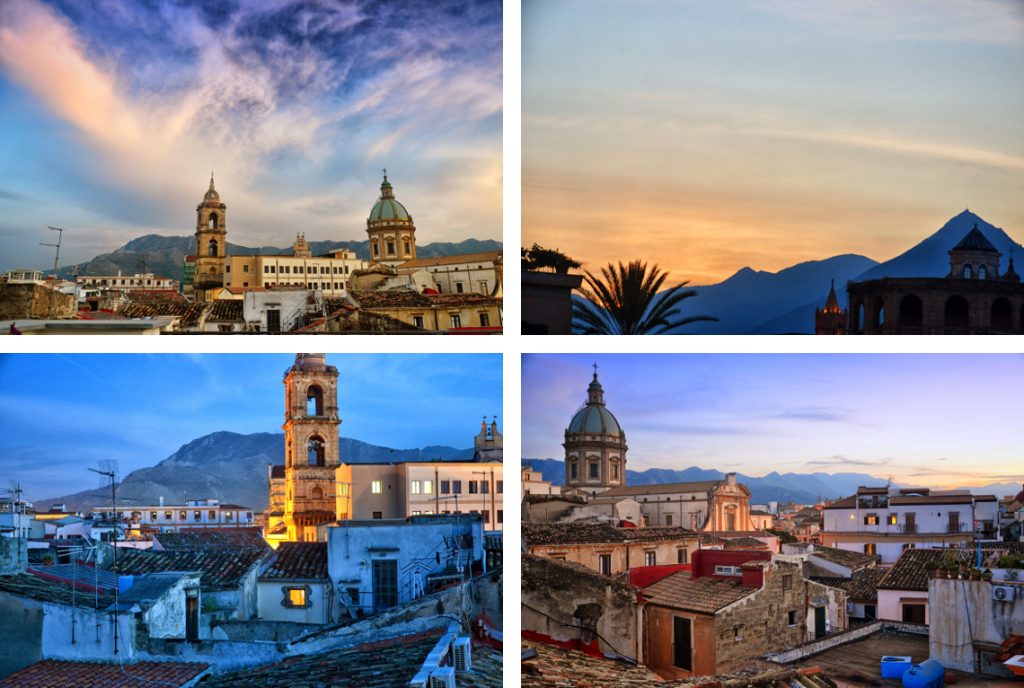 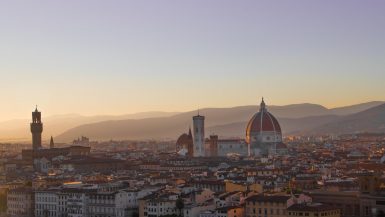 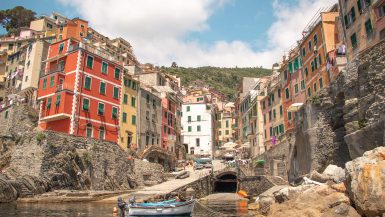 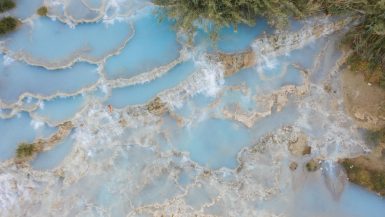