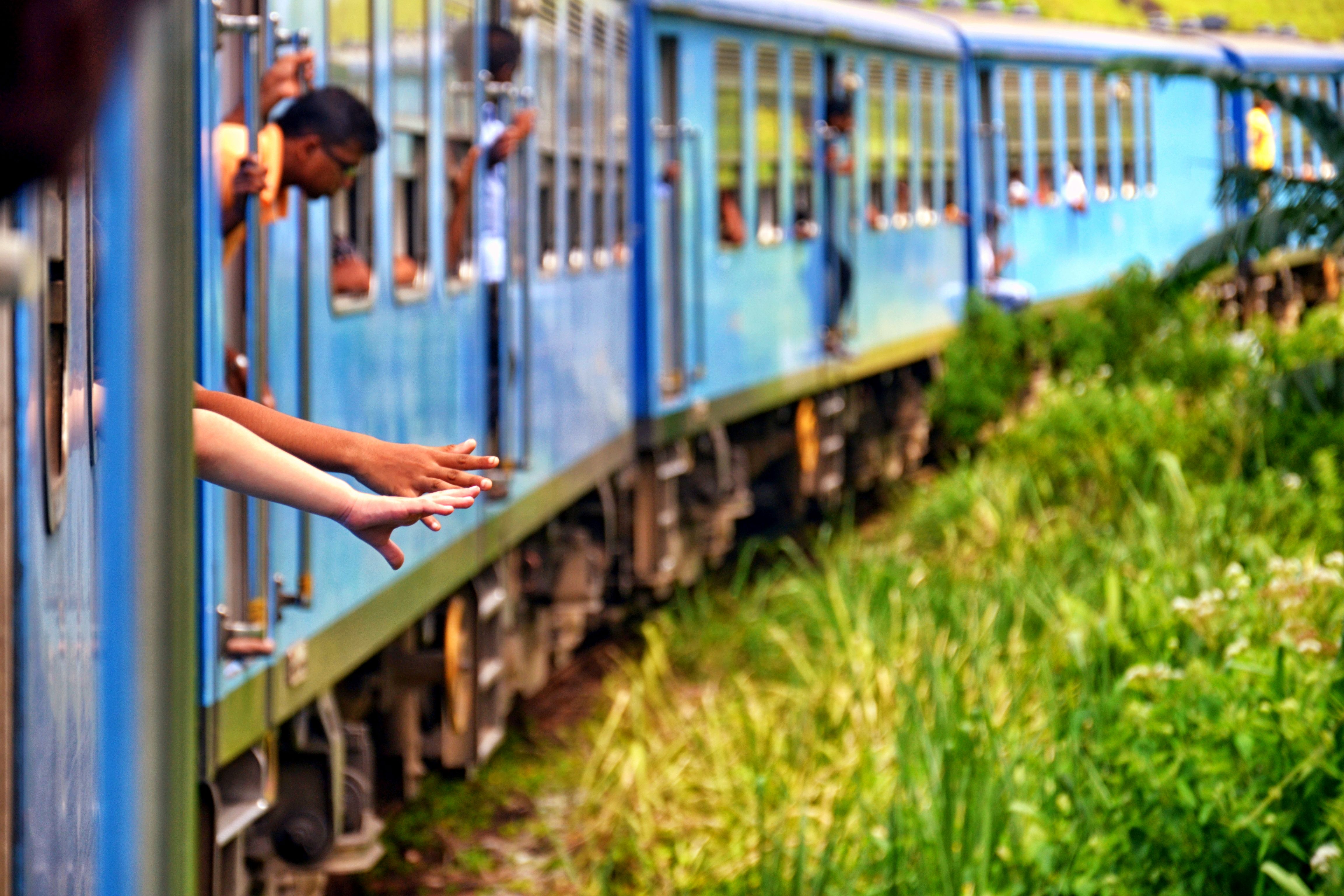 Nuwara Eliya is Sri Lankan tea mecca and heart of Ceylon. Place where time stopped in British colonialism era, where young boys plays cricket and Tamil woman picks tea leaves. In Nuwara Elija we understood time travel is possible. You just have to know which train to jump on!

By train to Nuwara Eliya

We got to located high above sea level Nuwara Eliya by train from Kandy (more about our visit to Kandy here: Visiting Buddha – Kandy).  We were quite surprised with its standard- clean and actually comfy enough.  At the same time you can go wild by sitting at the door stretching your legs outside the car and no one will bother you. It was really enjoyable to travel like this! Feel the wind, watching villages we were passing by and feeling temperature drop as the train gaining altitude. We went to Nuwara to see the best tea plantations and take one of the most exciting train trips on the globe. Many doesn’t realize tea likes high altitude where is cooler despite the fact most important producers are hot countries.

Due to fact it is located more than 1800 m.a.s.l. one has to except lower temperatures. Long sleeve and light rain jacket will be helpful. It wasn’t without a minor setback. Dawid booked accommodation on wrong dates and we found ourselves with no bed to sleep. With no issues we found a b&b on booking.com and spent a night there. It was basic accommodation without hot water but totally ok for one night. Straight on first evening we decided to tour local dives. We ended up in a 2 storey pub in a centre where we drank too much of a horrible local beer Lion. We met American couple who were traveling around India and Sri Lanka for months with two small children.  Austerely conditions and low quality of liquor didn’t bother them either. Also met a group of young local lads and had some lively conversations, couldn’t give you much detail as we switched to Lion Strong… While we were paying the bill we have realized our card is really blocked and had some trouble settling the check. It took some time to realized we’re cut off and in need of quick MoneyGram from home. Before you travel make sure you contact your bank as you can get in unnecessary trouble.

In the center of Nuwara Eliya

Nuwara is a really nice, pretty and well kept city comparing to the rest of the country.  Not including slums on the hills surrounding the city being home to Tamil people. In central point you have Victoria Park surrounded by British colonial villas. We have stayed overnight in one of those as we planned before and book upfront. It was definitely worth paying a little extra for experiencing this. We were welcome with cup of tea with milk served in appropriate china. Sri Lankan tea drank English style with milk taste sublime, strong brew compliment from drop of smooth milk.

As we were in the world tea centre we had to visit a plantation.  We have chosen nearby Pedro Estate which is quite adapted to visitors but at the same time keep authentic character. First we were taken around buildings were the whole process of production was explained and then we could explore plantation. It was charming and overwhelmingly green, there is also water reservoir Bomburella. If you want to see pickers at work you have to wander around. They pose happily but only after receiving green leaves and we are not talking about tea.  It is no surprise with such level of poverty tourist money is a greatly appreciated.

After plantation we visited Lover’s Leap waterfall which might not be the greatest on the Island but we had it all for ourselves.  Resting by cold water accompanied by infamous Lion beer was quite nice. From there we decided to walk to town to see some local life and it took around one hour.

We went for a short trek to get to top Single Tree Hill where you can admire view of surroundings and Single Tree Buddhist Temple. We started from the side where no road leads and were scrambling thru lush forest where we encountered a moving sight of Tamils slum. Visiting places like this always stay with you and remind you how comfortable and privilege life we live. After going down the other side we took longer route home. We went by George’s Lake and pass thru old racecourse which is used as soccer pitch. Beside players they were few horses pasture grazing